Home Knowledge bookcase Accessories What is a transformer? Structure and operation principles of the transformer Currently, transformers are very popular in power plants. Even transformers are used in households. So what is a transformer? Structure and operation principles of it. The following article helps you get more information about this device.

What is the transformer?

In another way, a transformer is an electrical device that uses electromagnetic induction to transmit, or alternate, electrical energy or electrical signals between circuits according to a certain principle. 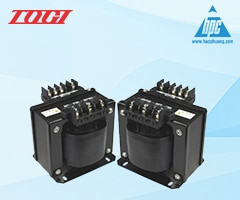 Structure of the transformer

A transformer is composed of 3 main parts: steel core, coil and case.

The steel core consists of the pillar and the Brace. Pillar is part to put the coil. The brace is the connecting part between the pillars to form a closed magnetic circuit. The steel core of the transformer is made from many thin insulated iron leaves insulated together. They are usually made of good magnetic materials.

This coil is usually made of copper or aluminum and the outside is insulated. The task of the coil is to receive energy and transmit energy. The coil responsible for receiving incoming energy (connected to the AC circuit) is called the primary coil (denoted by N1), while the coil that is responsible for transmitting the output energy (connected to the consumer site) is called is the secondary coil (denoted by N2). The number of turns on the two coils must be different, depending on the task of the machine, the number of turns of the coils varies. For example, N2> N1 is called a booster, if N2 <N1, then it is called a low-pressure machine

The casing part depends on the type of transformer which is usually made of plastic, wood, steel, cast iron or thin steel tone, which is used to protect the internal parts of the machine.

The working principle of a transformer is based on the phenomenon of electromagnetic induction (the phenomenon of forming an electromotive force (voltage) on a conductor when the conductor is placed in a variable magnetic field).

In 1831, Michael Faraday proved experimentally that magnetic fields could generate electric current. In fact, when the magnetic flux is sent through a closed circuit, a current is present.

And when the AC voltage is placed at the two primary coils, it will cause the variability of the phase inside the 2 coils. And the phase (the phase  is the flux line of the magnetic phase passing through an area; the phase is generated from the integration of scalar multiplication between magnetic phase density and the area component vector, over the entire area). This will go through the primary and secondary coils, then in the secondary coil will appear the inductance (another name is the transformer) inductance and alter the initial voltage.