The issue of rational and economical use of electricity has been propagated and mobilized by the Electricity of Vietnam through mass media, but the effectiveness seems to be still in the forecast.

Table of Contents Hide
1 In term of agriculture.
1.1 Disadvantages when using simple type control devices
1.2 Solution to reduce power loss when using inverter
1.3 What is soft starter?
1.4 Why Fuji inverter is the solution to this problem ?

In term of agriculture.

Here, we would like to suggest a solution, technically it is not new compared to advanced and industrial countries, but very necessary for agricultural production facilities are using medium and large capacity asynchronous electric motors..

If a device is used to control a simple type, the asynchronous motor has some disadvantages.

This has adversely affected other machines operating simultaneously and reducing the life of the electric motor.

2) Rotation speed of induction motor is only controlled by level . Normally, each motor can only change one of the synchronous speed ranges.

While there are production technologies that require the drive system to be controlled continuously (steplessly) according to the torque and load changes, the power transmission system is not capable of responding. 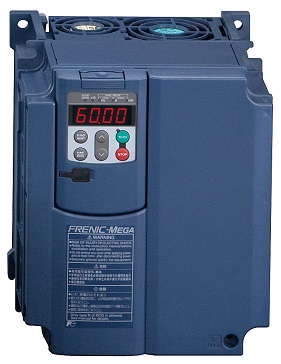 In order to start and stop the medium and large capacity asynchronous electric motor, it is common for production facilities to use direct start method (via  circuit breaker), thus causing pressure drop on a rather large line. .

Conditional production facilities use the device “star / delta starter (U / D)” … to limit the current when starting, so the pressure drop and power loss on the line decrease significantly.

However, the “traditional” method cannot match the trend of producing high quality goods according to advanced technology and the power loss rate in the whole system is still quite high.

What is soft starter?

Soft starter is an electronic device that only replaces the “star / triangle” starter method to reduce the current at startup, but is unable to control the motor speed.

Soft starters are often combined with medium and large capacity asynchronous electric motors but do not require a change in the number of revolutions, eg some devices and machines such as agricultural water pump, ventilation fan in storage, feed mill

Why Fuji inverter is the solution to this problem ?

Due to the boom of microelectronics and power electronics, there are more and more types of asynchronous electric motor control devices with perfect functions, convenient to use, safe and capable of maximum power saving that Fuji inverter is a typical.

With outstanding features, in addition to improving the control capability of the machine system, it also provides energy saving efficiency in machines with variable load speed.

With the development of the electricity industry – automation in agriculture, it is hoped that advanced and modern control systems will gradually be used more and more in production to contribute to saving resources for the country.