Home HPC news HPC Entertainments Updating news of the 5th round of the 2018 Hao Phuong Cup... After more than 1 month of exciting competition, on July 25, 2018, the 2018 Hao Phuong Cup football tournament was officially closed, marking an impressive and successful season.

Especially, the final round of the tournament has devoted to football fans some dramatic scenes, brought a great and impressive sporty atmosphere.

Table of Contents Hide
1 Let’s review the highlights of the 3 beautiful performances of the fans in this final round!
2 Schedule of 6 teams in the final round
3 First match: Team 4 was immersed in a victory against Team 6
4 Second match: A resounding victory for Team 3
5 Third match: Team 5 made a rain of goal into the net of team 2
6 Competition results of 6 teams in the final round
7 Summary table of the tournament 2018 Hao Phuong Cup

Let’s review the highlights of the 3 beautiful performances of the fans in this final round! 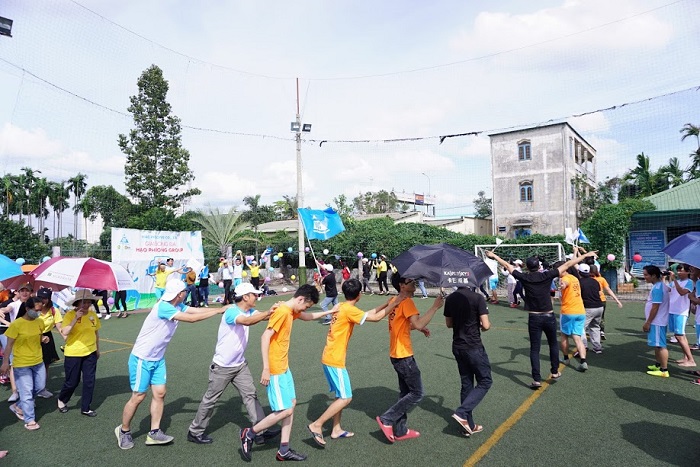 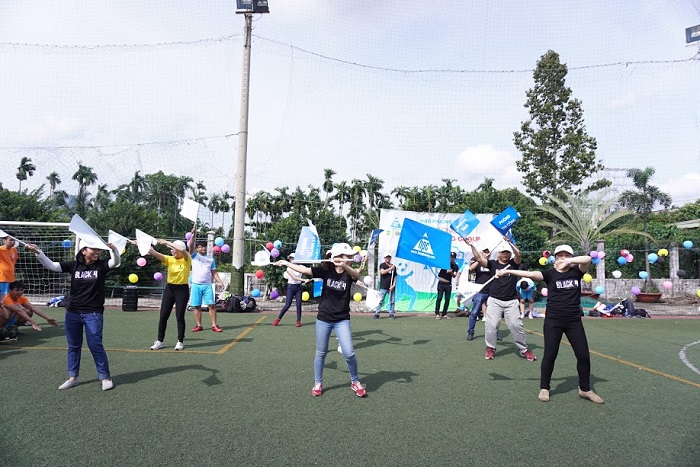 The exciting opening performance of Team 4 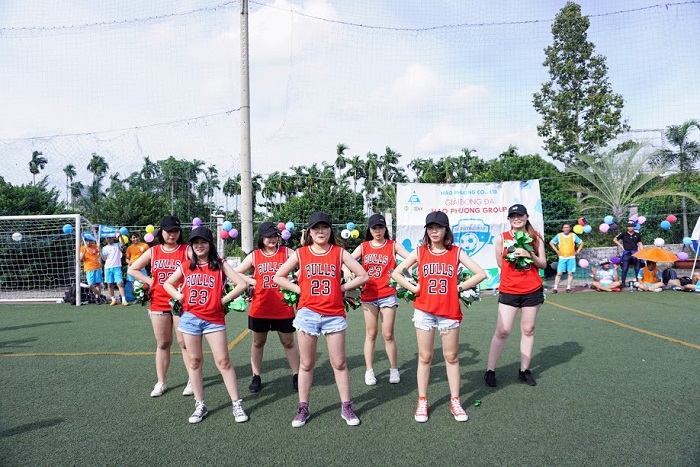 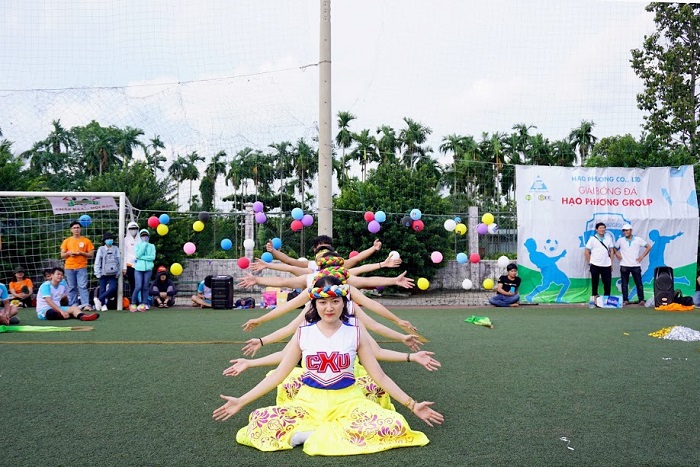 Praise your eyes before the graceful dance of Team 5 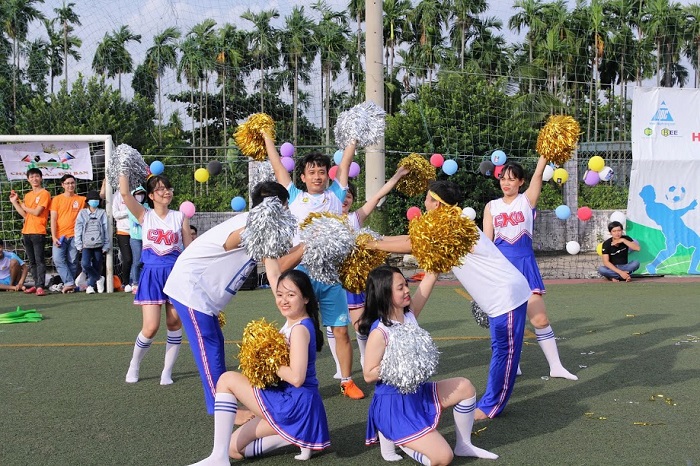 Schedule of 6 teams in the final round

First match: Team 4 was immersed in a victory against Team 6

It’s still a 4-goal gap, but the Black Four overturned the situation compared to the previous games. They won a resounding victory against team 6 with a score of 5 – 1.

From the merely first few minutes, both teams approached the match with a quick kick, coordinate rhythmic techniques. They constantly bring the ball to the opponent’s goal to create dangerous situations. After missed several opportunities, Huu Huy raised the score to 1 – 0 for team 4 with a dangerous shot, knocking down the goalkeeper – Duc Long immediately. 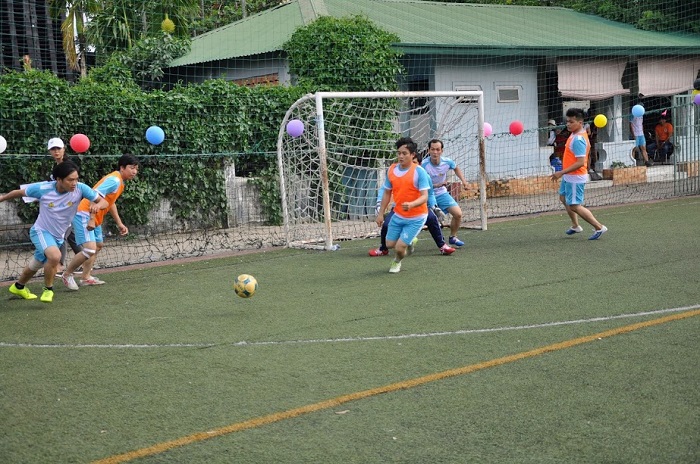 A dangerous ball in front of the goal

Team 6 raised the formation to counter-attack but unfortunately, there was no goal to equalize the score. At this time, both teams are actively approaching as soon as the opponent has the ball. Therefore, all players must exert all their strength as well as their best playing techniques to get rid of the round of control that the opponent is spreading. 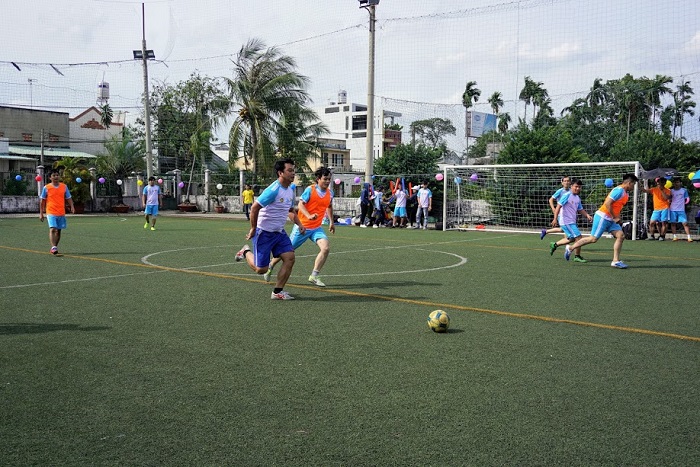 Ke Phu and Huu Huy made a victory when continuously bringing 2 goals to raise the score 3 – 0 for Team 4.
Coming to the second half, thanks to the smooth coordination of Van Doi, Thanh Huyen took the shot to shorten the score to 3 – 1 for team 6. The atmosphere on the field was very busy now, continuous encouragement from the 2 teams supporters.

Refused to give up, Thanh Hai raised the score to 4-1 with a beautiful and technical goal.

In the end, Team 4 scored one more fortunate goal to close the match with the final score 5-1.

Before the start of the match, team 1 suffered a great loss. The player who is leading the top scorer – Nhat Anh, has been absent due to the previous 2 yellow cards. This makes the power of Team 1 greatly reduced. Therefore, Team 3 did not ignore this one-year opportunity to bring the main striker of their team – Mr.Hieu Trong to win the prestigious top scorer award.

At the beginning of the match, two teams were struggling to get along each other when suddenly, in a chaotic situation before the goal, Hieu Trong quickly escaped the mentoring of the opponent’s defender. He calmly controlled the ball and hit the right shot to hit the net of team 1, opening the score for team 3. 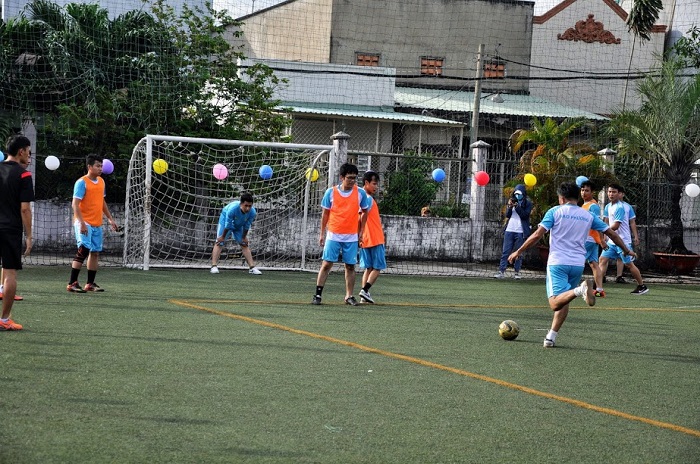 The free kick right in front of the goal

Near the end of the first half, the effort of the first team became hopeless when Duy Hieu made a mistake and received a red card to leave the field. The match was getting harder and harder for team 1.

Coming to the second half, Hieu Trong made a miracle again, he continuously put 2 goals into the opponent’s net at close range. The score is now 4 – 0 and officially won the scorer award.

Mr. Hoa tried to shorten the score for the first team with a beautiful shot but failed.

Mr.Ngoc Thien officially closed down the score with 5 – 0 for team 3 when he put the ball into the goal of the first team at the last minute of the match. 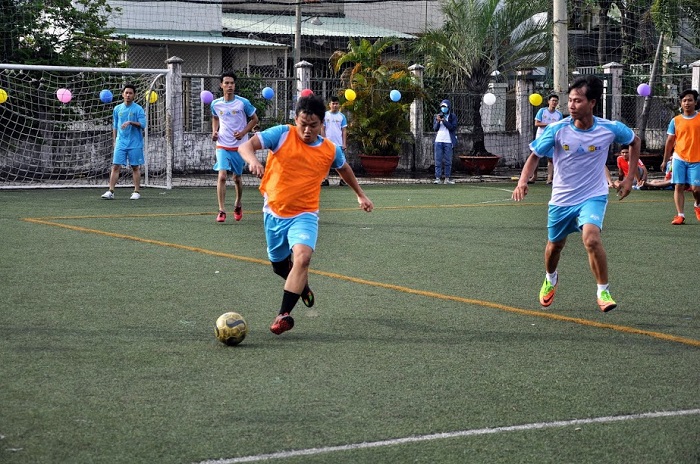 The whistle that ended the referee’s match resounded in the extreme joy of the players and the team 3 fans with a resounding victory with a score of 5 – 0.

Third match: Team 5 made a rain of goal into the net of team 2

After the first team lost to the 3rd team, team 2 became champion regardless of the outcome of this match. This leads to very comfortable psychology of team 2. Meanwhile, team 5 is in need of a victory to be able to finish with 2nd place. They are forced to release the strongest formation.

In less than 6 minutes, after the referee’s whistle, the players of team 5 had many chances to finish towards the goal of the team 2, causing the goalkeeper of team 2 to work hard right from early game. The players of team 5 held a continuous attack towards the goal of the team. Didn’t disappoint the audience, 2 consecutive goals by Ngoc Dung and Van Tai raised the score to 2 – 0 for team 5. 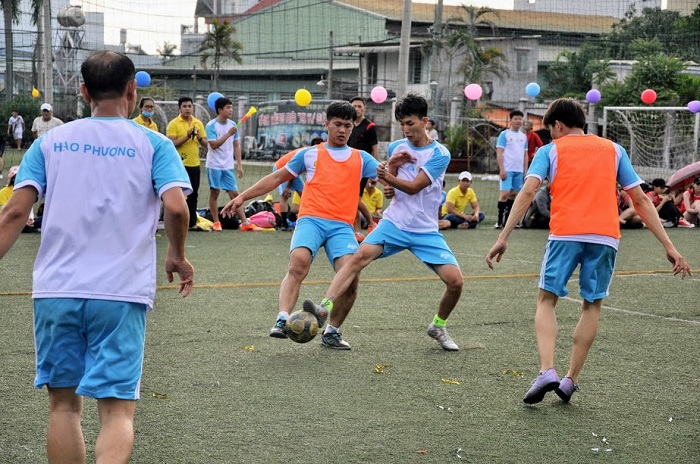 The players vied for the ball drastically

During the first half, team 5 worked effectively, there were many dangerous shots towards the goal, causing the team goalkeeper to panic. A series of opportunities are created. Team 5 enjoyed 1 penalty and Ngoc Dung quickly broke the opponent’s net to increase the score to 3 – 0.

Team 2 slumped all the way to attack but failed. They also missed many opportunities to shorten the score.
At the end of the first half, the score was 5 – 0 in favor of team 5.

n the second half, Team 5 continued to explode when Van Tai launched a shot to conquer the team, brought the score to 6 – 0. 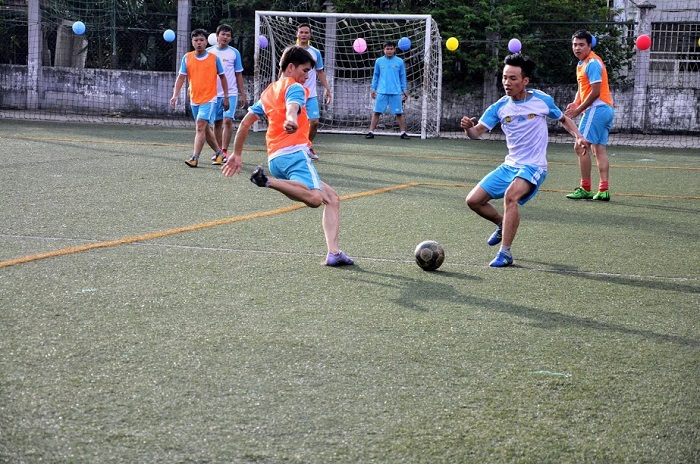 when everything seemed to be arranged, at the last seconds of the match, Van Xin made a miracle with the honor goal for team 2, shortened the score to 6-1.

Shortly after, the referee raised his whistle to end the match. Team 2 is officially the champion of the 2018 Hao Phuong Cup football tournament.

Competition results of 6 teams in the final round Summarize the score of style prize after 5 rounds

Summarize ranking and results after 5 rounds

In addition, the organizers also awarded the style for the fans of team 4 and team 5. They deserved a thorough dedication to the special performances that contribute to the success of the tournament.

Hạo Phương Cup 2018 is a healthy playground, encouraging the movement of physical training and sports, as well as an opportunity to create conditions for officials and employees to exchange, learn from each other, build relationships. solidarity system between departments.

Thank you to all the players, fans and members of Hao Phuong’s family for helping and supporting enthusiastically to make the tournament a success.