After the fierce battles of 6 teams from the previous 3 rounds, on August 17, the 2018 Hao Phuong Group football tournament continued to explode excitedly. It can be said that these are really fierce matches. They have devoted many beautiful moments and extremely passionate spirit of competition.

In addition to the enthusiasm and sublimation of the “golden” legs on the pitch, it is impossible not to mention the energizing fire, stirring the atmosphere of the Fans. Perhaps this is always the “endless inspiration” of the photographers of Hao Phuong. Come on! Let’s take a look back at the memorable moments of the game through the realistic and vivid images below! 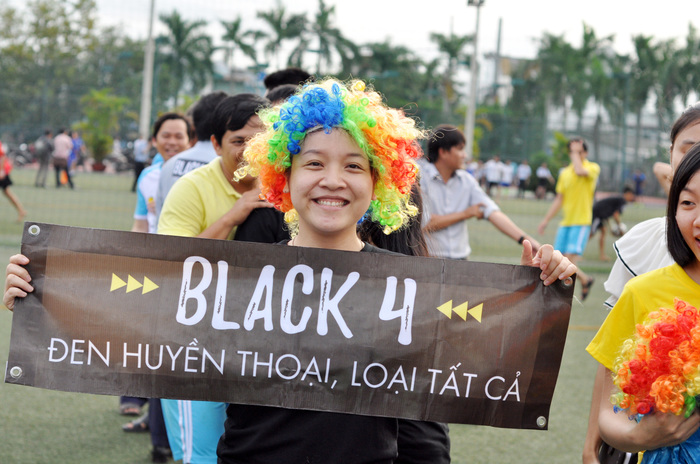 Fans of the team 4 in the clown costume 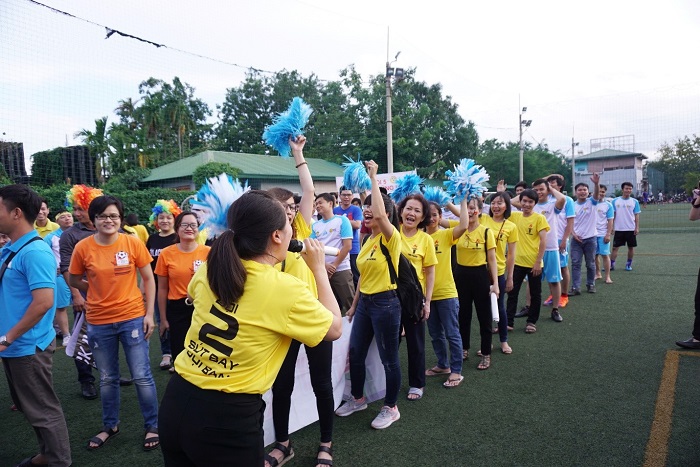 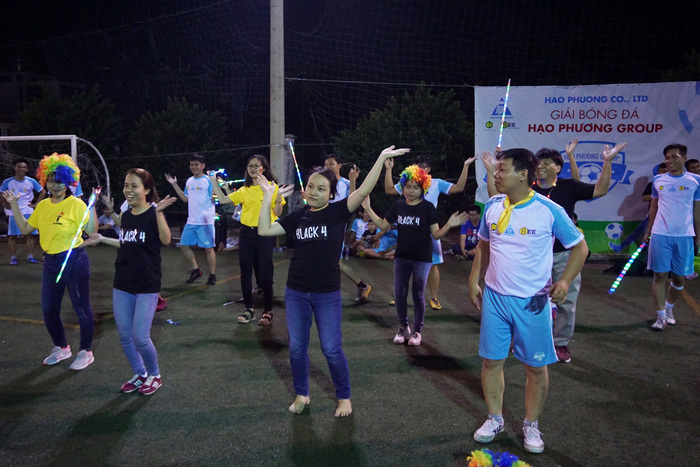 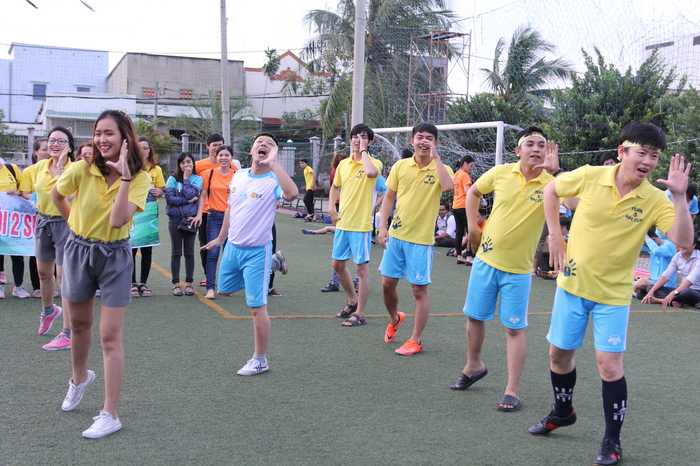 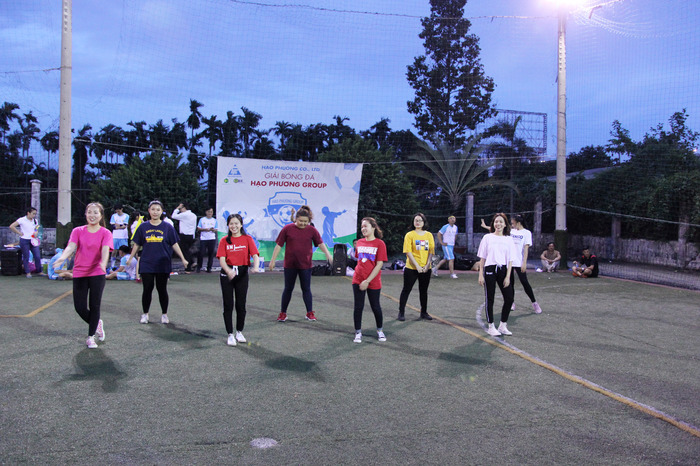 Table of Contents Hide
1 Round 4 is the competition from teams.
1.1 First match: Team 1 – Team 5: offering 40 minutes of voyeuristic, all stars compete with each other’s talents.
2 – First half: The good coordination of Team 1
3 – 2nd half: Team 5 strongly counter-attacked
4 2nd match: Team 2 vs Team 4 – an emotional battle.
5 – First half: An Impressive score-chasing
6 – 2nd half: Rain of goal of Team 2.
6.1 3rd match: Team 3 vs Team 6: Song Trong made a miracle for the Hao Phuong Group 2018 football tournament
7 – 1st half: team 3 overwhelmed team 6 with 3 consecutive goals
8 – In the 2nd half: Song Trong continued to shine, team 6 tried to score.
9 Summary of round 4 results

Round 4 is the competition from teams.

Competition schedule of teams in round 4

– First half: The good coordination of Team 1

After only 2 minutes of opening, Team 1 raised the formation and continuously created opportunities on the team goal. However, the opportunity was transformed to Team 1 right from the 5th minute of the match, the score was raised to 1 – 0

Looking at the situation of the match, everyone wondered why players of Team 5 didn’t show signs of fatigue. Despite being led before, their faces still showed their determination to win. Perhaps, a sustained spiritual power from the fans motivated them to fight like that?

The brightest star – Mr.Nhat Anh of Team 1 was very outstanding when he continued to have dangerous shots in front of goal 5. Unfortunately for him without a chance to score in the first half. 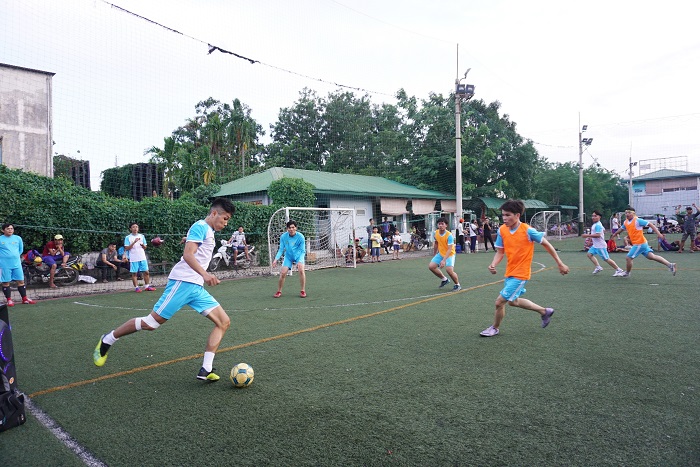 Entering the second half, team 5 rushed to attack strongly, goalkeeper of Team 1 was very hard to keep the goal. Many chances are created but failed.

Van Tin also missed many opportunities to score goals for the team. His kick in front of the goal of Team 5 but the ball flew out.

The fans of Team 5 broke down when Cong Dung leveled the score 1 – 1 with a beautiful shot. 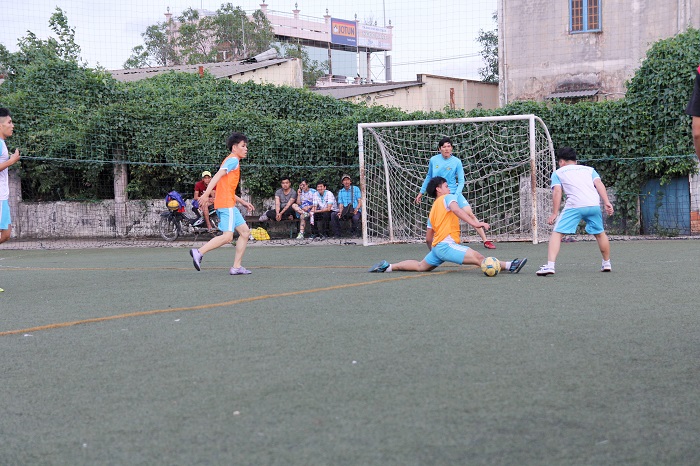 Unfortunately, soon after, Nhat Anh raised the score to 2 – 1 for team 1. Around the stands, everyone had to say that the two teams have devoted wonderful and impressive moments to the audience.

The whistle ending the game is resounded, the score was set 2 – 1, the victory belonged to team 1.

Before Team 2 and Team 4 came to the pitch, the fans of Team 6 cheered up the spirit of the two teams with a lively flashmob dance. 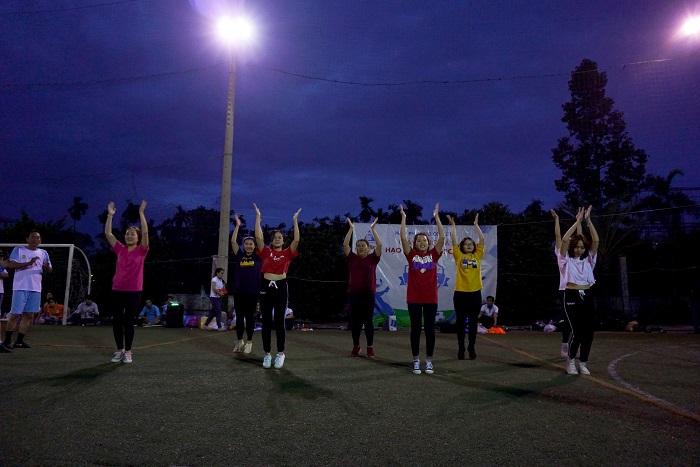 – First half: An Impressive score-chasing

After the first few minutes of the match, Team 2 threatened the goal of Team 4 with a lot of dangerous passes. Soon after, Van Quoc raised the score of 1 – 0 for team 2.

Goalkeeper of the Team 4 also excelled when constantly catching the ball from the corner of the opponent.

A golden opportunity has arrived, Thanh Trien – Team 2 player, has contributed a beautiful goal and increased the score to 2 – 0.

Minutes later, team 4 continued to attack non-stop, they were determined to help the match become dramatic but luck has not yet arrived. And after many missed efforts, the smooth coordination of Quang Khai and Huu Huy shortened the ratio of 2-1 to team 4. 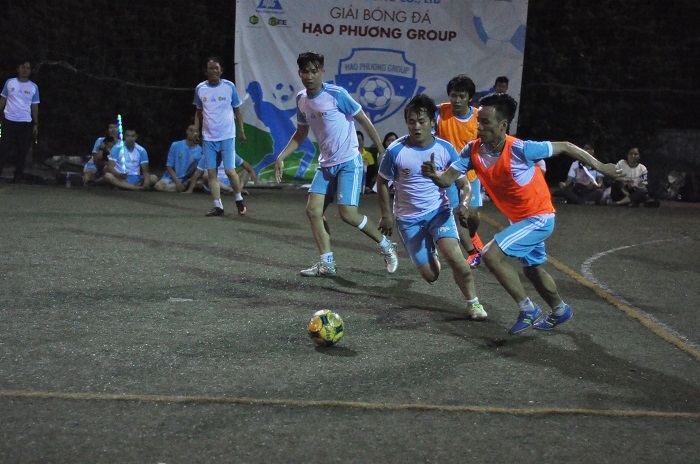 The atmosphere on the stadium was so exciting now, it can be said that Team 4’s fans were so great, they kept shouting the slogan “Team 4 is the champion” to raise the morale for the players.

After scoring the goal, the spirit of Team 4 was doubled, constantly making dangerous shots on the second team goal but powerless.

In the first minute, Team 4 endangered Team 2’s goal but the result was unsuccessful.

Great opportunity for team 4 when they have 2 consecutive free kicks near the goal of Team 2. Players of Team 2 create a barrier, team 4 misses the chance because the goalkeeper of Team 2 has excellently embraced ball.

Xuan Khanh, Anh Thien are two bright players who contributed to the resounding victory for team 2 when continuously scoring in just a few minutes, bringing the final score to 5 – 1 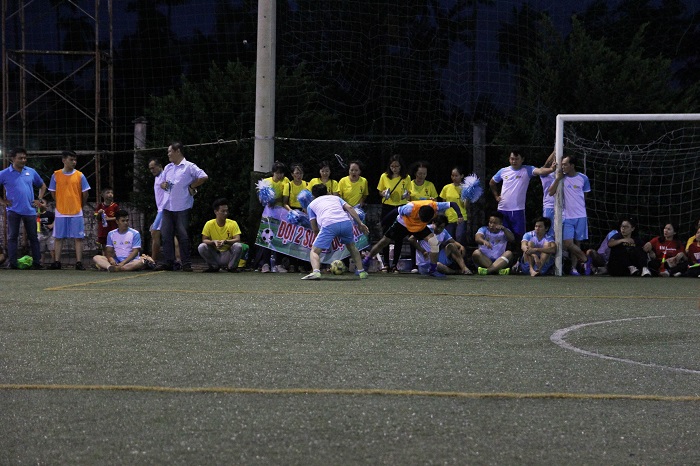 Black 4 doesn’t win but in the minds of fans of Team 4, they are the heroes and champions of the tournament.

In the first few minutes of the game, Team 3 was excellent when they scored a goal on Team 6’s goal in a split second. Song Trong opened the match by 2 goals for Team 3 and raised the score to 2 – 0.

Soon after, Hieu Trong immediately contributed to bringing a devoted “masterpiece” to the tournament.

Without hesitation, Team 6 also rushed to attack, bringing the ball close to the goal but the chance was failed. 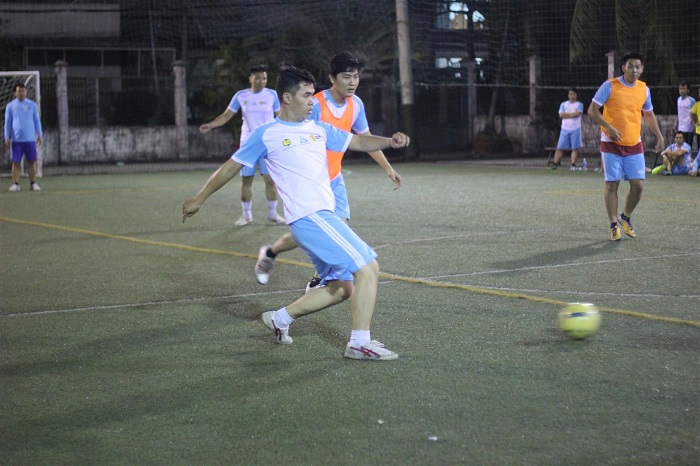 In the first half, team 6 had a chance to kick at close range but the ball flew over the crossbar of the 3rd team. Despite being 3 goals ahead, the spirit of Team 6 was still very determined, they constantly created situations difficult for your team goalkeeper.

– In the 2nd half: Song Trong continued to shine, team 6 tried to score.

Team 6 had a change in the formation, Duc Long took the position of goalkeeper. Duy Minh entered the main playing position.

The match was exciting, fierce ball disputes from the players of the two teams. 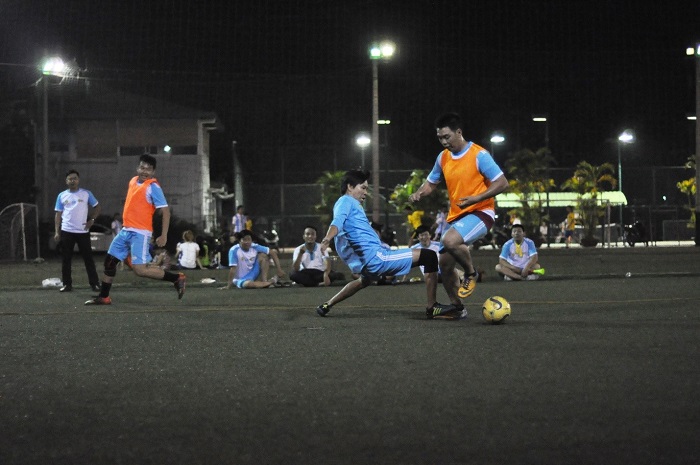 Once again, Hieu Trong scored a brilliant shot to lift the score to 4 – 0.

A chaotic situation before the goal of Team 3, the ball to Van Doi’s feet, as fast as a lightning bolt, Van Doi gently put the ball into the goal of the team. Goalkeeper of Team 3 could not keep up. The score was reduced to 4 – 1.

Right after that, Duy Minh launched a shot to cross the post. Unfortunately, the ball flew out of the goal. It can be said that after Mr.Doi’s goal, Team 6 tried hard to attack, Team 3’s goalkeeper must have struggled to keep the goal.

A perfect combination between Hoang Vinh and Van Doi, once again, Van Doi took a dangerous shot to bring the score down to 4 – 2.

Team 3 refused to settle down, Cong Trong scored another goal, set up a hat trick for himself, the score is now 5 – 2 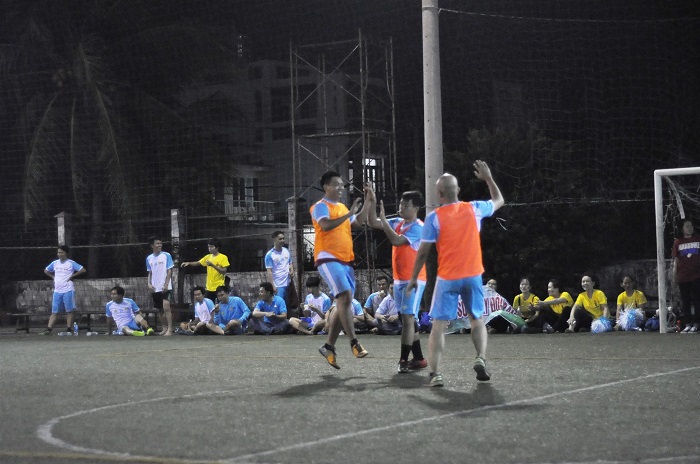 The players of Team 3 celebrated after a beautiful goal

Really satisfied with the dedication of the two teams in the Hao Phuong Group football tournament 2018 tonight, the goal hit the net like rain. Fans of Team 6 rejoiced in the moment Thanh Hai scored another goal to shorten the gap to 5 – 3

It is not exaggerating to say that this match is the place for Song Trong to shine like a star. When Cong Trong established a hat-trick, Hieu Trong also made history. At the last minute, Hieu Trong closed the match score of 6 – 3 when he put the ball into the net of Team 6.

The referee blew the whistle to finish the match with a score of 6 – 3, the victory belonged to Team 3

Summary of round 4 results

After round 4, which team is closest to the championship? How was the race for Style Awards? Let’s see the following results together!

Result of round 4 of the Hao Phuong Group football tournament. Summary of tournament scores after 4 rounds of the tournament Which team will touch the prestigious trophy? With only one round left, let us continue to watch the next match in the 5th round to see which team will make history in this Hao Phuong 2018 football tournament!