Still, the beautiful ball from the players and the cheers from the fans but the second round of the opening of the Hao Phuong 2017 football tournament is a really tough and challenging competition because the kickers understand a few play style of the opponent and take the initiative in defense as well as attack.

Table of Contents Hide
1 Opening from 07/07
2 Match 1 (Teams 2 & 3): Great matches
3 The second half was always more exciting because the players of the two teams had time to consult new tactics.
4 After 2 goals in the first half
5 Match 2 (Team 6 & 4) Great saves
6 However, the 7th minute of the first half
7 With the score 3: 0 leaned on Team 6, the strikers of Team 4 constantly brought the ball to the goal of the team.
8 Match 3 (Team 1 & 5) Creative and tricky gameplay.
9 In match 3 the strikers of the two teams really gave the audience new ways to play spectacular passes and goals.
10 To the second half
11 Balance ratio when the second half time

Hao Phuong 2017 football tournament has experienced an exciting and surprising tournament. Maintaining the team spirit during the competition but the strikers of the 6 teams were also able to give the audience an excellent ball, making it “eye-catching” for those who love football but not directly to the field.

Before the round of competitions of the second round took place, the organizers also awarded prizes to the right and earliest individuals to predict the winner of the first round. This is considered entertainment to warm up and Encourage everyone’s spirit throughout the season.

As soon as the referee whistle signaled the start of the first match between Team 2 (green) and Team 3 (redshirt), the fans of the two teams kept shouting and cheering with the “assistants” such as mics, whistle, water bottle … Although there was an unexpected result in the first round, right now, the strikers of Team 2 came out with enthusiasm, determined to improve the score. Therefore, on the 6th minute of the first half, striker Hoang Thien scored the first goal for Team 2. And only 2 minutes later, player Quang Khai “controlled” the ball to overcome the defenders of the opponent, successfully scored on goal, increased the first half to 2: 0, leaning towards Team 2. 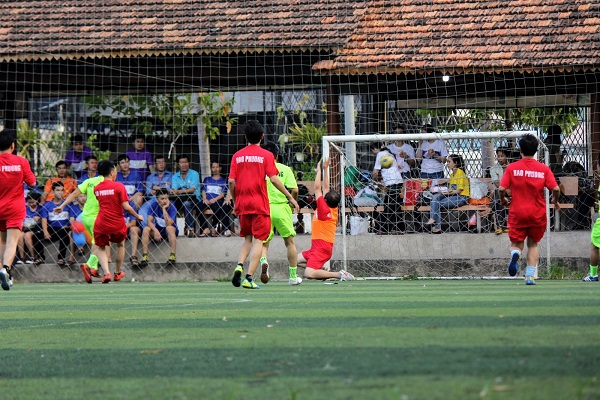 The second half was always more exciting because the players of the two teams had time to consult new tactics.

With the goal of improving the score, the red-colored boys kept putting the ball back to your team. However, right in this match, it can be said that the defensive of Team 2 is quite outstanding, so Team 3 still has not had a chance to score. 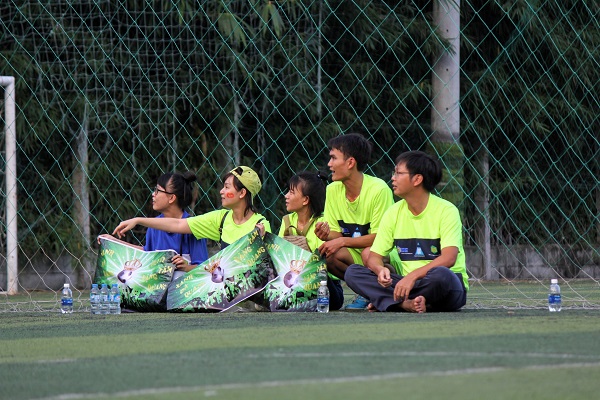 Fans of Team 2 (glowing green) always stand side by side with the players of the team. Photo: Chau Quynh

After 2 goals in the first half

The strikers of Team 2 seem to give up the center area for your team to retire to the defensive, while the Team 3 players look for every chance to break through your team. However, luck did not smile at the boys in red, so in the middle of the second half, even though the whole team had good tactics, the loophole from the strikers created the opportunity for the Van Doi player of Team 2 to kick off The ball succeeded in goal, ending the match with a score of 3: 0, leaning towards Team 2. 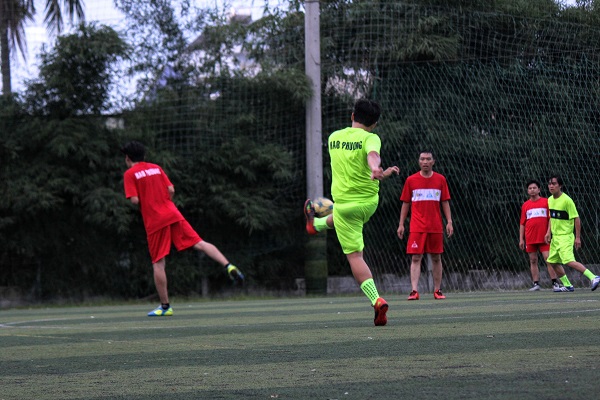 In the second round, Team 2 (glowing green) had spectacular balls. Photo: Chau Quynh

Although there was an unexpected result, the good combination of teammates and the regular team of Team 3 has always created sympathy for the audience outside the audience. 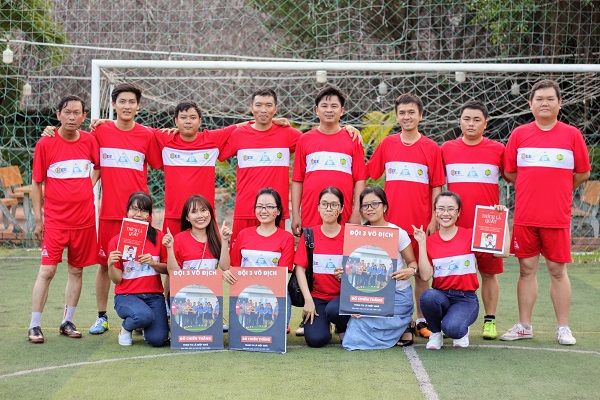 Lineup of Team 3 (red shirt) before going to the field. Photo: Chau Quynh

Unlike match 1, the match 2 atmosphere was extremely tense from the first minute. Being rated as “peer-to-peer” in the second round, the strikers didn’t miss any chance to score. These are two teams that not only possess excellent strikers but also know how to apply team strength.

However, the 7th minute of the first half

Huu Huy’s carelessness made him receive a yellow card right away. This is also the first yellow card since the tournament. Having a uniform technique and stable spirit, Team 6 quickly regained the spirit and Thien Long – potential striker of Team 6 scored successfully, opening the score 1: 0. Soon after, Huu Huy also regained his honor when he was the second to raise the score for Team 6 to 2: 0. Huy is also the owner of the third goal when the defense of your team has many loopholes. 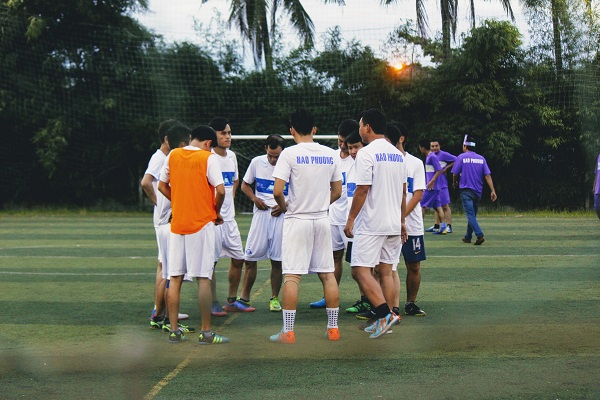 Players of Team 6 (white shirt) encouraged each other before coming out. Photo: Chau Quynh

With the score 3: 0 leaned on Team 6, the strikers of Team 4 constantly brought the ball to the goal of the team.

However, everything seems to be difficult, especially when the outstanding players are being pinned down by the striker of Team 6. That is also the reason why all the attacking ball of the white shirt team failed. Many fans said that this was a dramatic match because the ball was definitely finished by the boys, but Team 6 seemed to be superior in how to lead the ball into the goal. 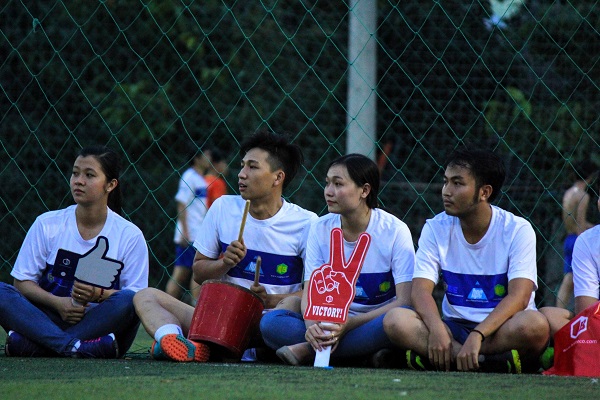 The cheerleaders cheered the 6th Team with the cheering cheers. Photo: Chau Quynh

Near the end of the second half, the defenses of Team 4 were somewhat obscene, so Van Linh did not have difficulty passing 2 players of the team to break the net successfully, raising the score to 4: 0, leaning towards Team 6. This is also the final result of match 2 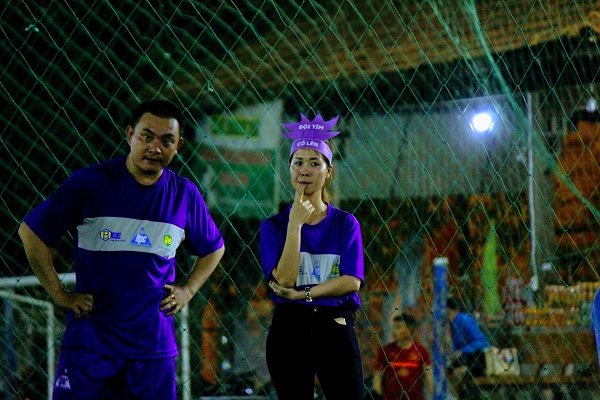 With cold heads, confidence and bravery, match 3 of this qualifier is really a dramatic competition. Although the weather is cool, the atmosphere in the football field and outside the stands cannot be “cooled down” because the dangerous balls always put the frame into two teams. In addition, the fans this time have prepared a lot of unique cheers with the hope that their team will win. 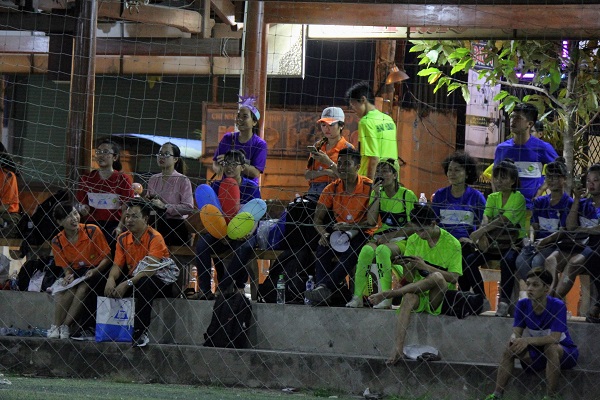 Fans in the stands with many interesting cheers. Photo: Chau Quynh

In match 3 the strikers of the two teams really gave the audience new ways to play spectacular passes and goals.

Right in the first half, the fans had to hold their breaths every time the players shoot the balls into the opponent’s goal. However, each player of these two teams is not “easy to play” so even though there are many ways to attack and defend, the score is still 0: 0 at the end of the first half. 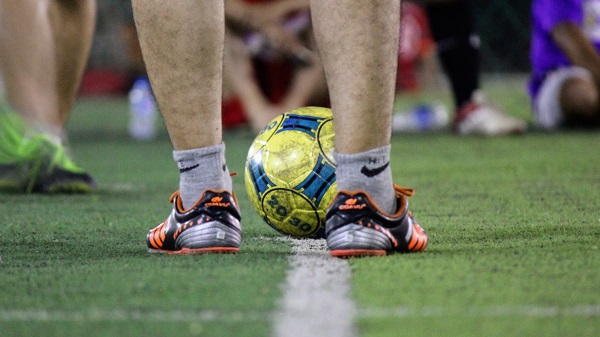 Each shot is a process of thoughts of every player. Photo: Chau Quynh

With the determination to bring the goal to the team, the strikers seem to have the same question as “how to make the ball into the frame of your team?”. And player Ngoc Son of Team 1 was the first to find the answer, opening the match score at 1: 0 before the cheering of fans. Meanwhile, the blue-shirted brothers had to bid farewell to Duc Nam player because after the goal of equalizing 1: 1, Nam was penalized by the referee and left the field.

Balance ratio when the second half time

The blue team missed a striker, making the match more intense and dramatic. There were even times when the goalkeeper of the two teams approached the pitch because of impatience that ended a player’s finishing phase. In the last minute, Team 5 seemed to excel in the attack, so Thuc’s players put all their effort into the defense and shot the ball in front of the goalie of Team 1.

2: 1 ratio made Team 5 determined to compete with the new posture to change the score. However, the defense of Team 5 is quite solid, so the definite phase of the yellow strikers hits the vertical column or is within the goalkeeper’s goal. Today is an unlucky day for Team 1 so the boys have to accept the 2: 1 ratio, leaning towards Team 5. 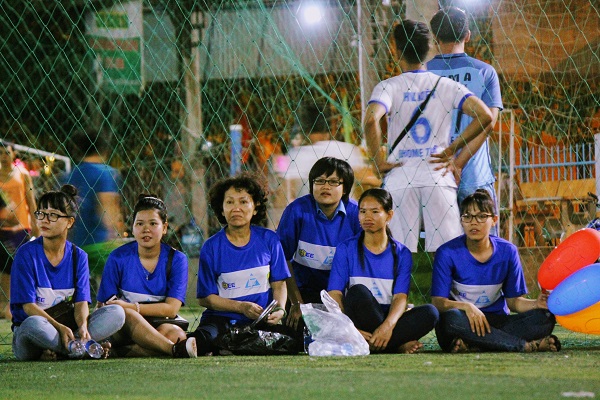 Fans of Team 5 (blue) cheered and commented on the game. Photo: Chau Quynh

Round 2 of the Hao Phuong 2017 football tournament has closed under the regret of many players and fans. What will the next matches look like? Which team will continue to have excellent ball passes and break the net successfully? Don’t forget to visit our website and Fanpage to update the hot news!