Hao Phuong 2017 football tournament officially opened at the Phu Long football field. The beautiful ball of the players and the exciting cheers from the fans stirred the peacefulness of the area around the football field.

Table of Contents Hide
1 At the opening ceremony, representatives from the Board of Directors shared:
2 After the opening ceremony, the first round of Hao Phuong 2017 football tournament took place excitingly
2.1 Match 1: Spectacular back-to-back performances of Team 1 after “falling horses”
3 The first match is the competition of Team 1 (yellow shirt) and Team 6 (white shirt).
3.1 Before the “pressure” of Team 1
3.2 Match 2: “worthy opponents”
3.3 After 2 consecutive goals
3.4 However, when the second half is about to end.
4 Match 3: Beautiful performances from talented strikers
4.1 Determined to keep the score until the end of the game
4.2 2 consecutive goals in the second half seem to have strengthened Team 3
4.3 Thus, the first round of the Football Tournament 2017 was officially closed.

At the opening ceremony, representatives from the Board of Directors shared:

We hope this tournament will become more and more solidarity among brothers, and this is also a premise for us to always find useful playgrounds for everyone later. At the same time, the Board of Directors also reminded the players before playing: Play well, play hard and always carry the team spirit on the football field. 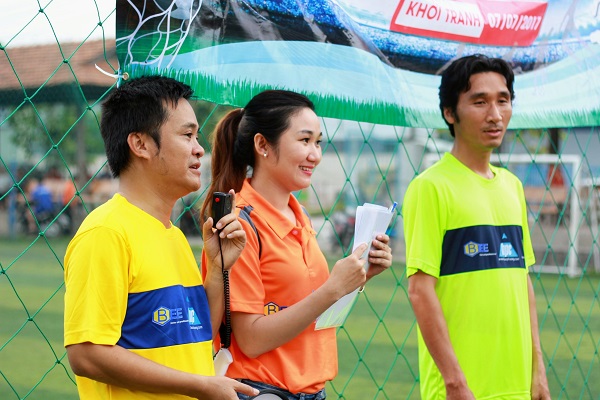 Sincere remarks from the Board of Directors before the teams compete. Photo: Chau Quynh

After the opening ceremony, the first round of Hao Phuong 2017 football tournament took place excitingly

In turn, 6 teams (divided into 3 matches) competed with enthusiasm and always created opportunities for them to show excellent ball. Join us in 3 exciting matches in this round! 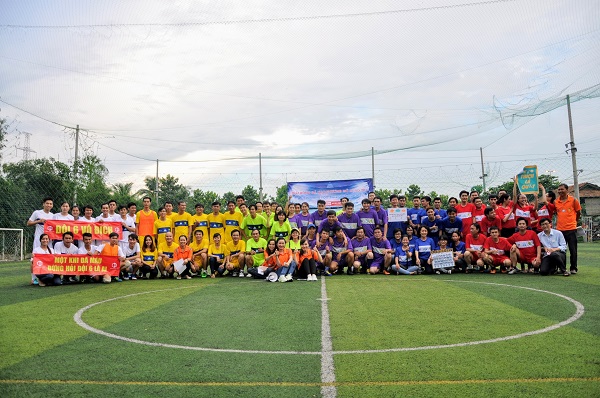 the Teams take a picture before competing. Photo: Hong Hai

The first match is the competition of Team 1 (yellow shirt) and Team 6 (white shirt).

As the first two teams to go to the field, the strikers had competitions that made the audience throbbing their hearts. In the first minute, the players of Team 6 soon caught up, coordinated with the game and quickly mastered the football field. Thanks to that, right on the 5th minute of the first half, striker Huu Huy brought to Team 6 the first goal. 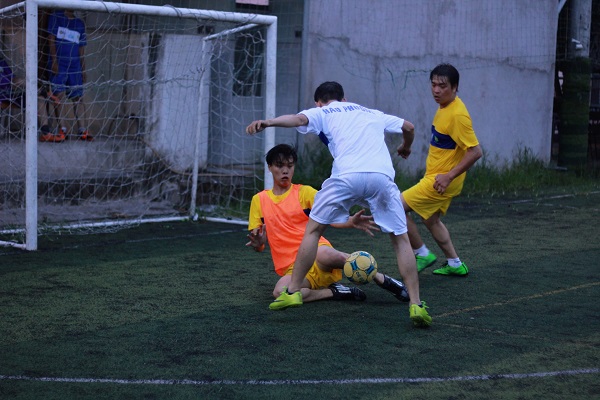 The strikers continued to combine and attack the ball on Team 1’s goal. At the 10th minute of the first half, Duy Minh continued to break the net, increasing the score to 2: 0. And Mr. Văn Quốc scored another goal again, finishing the first half with a score of 3: 0, leaning towards Team 6. 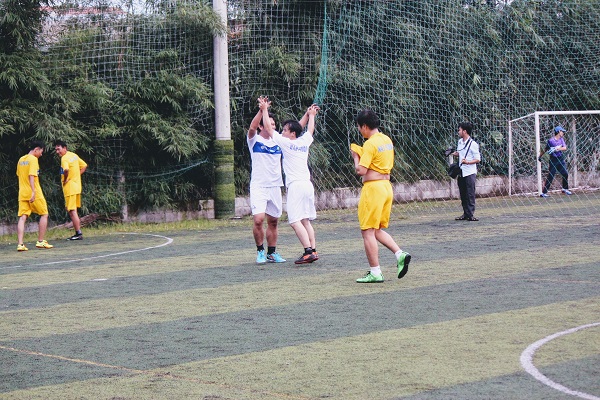 Before the “pressure” of Team 1

The players of the “Yellow team are not mediocre” still keep the game calm and find every opportunity to counterattack. At the second half, the strikers seemed to have been strengthened by their teammates and supporters, so they continued their fierce competitions. The most surprising thing is that the players of Team 1 have more and bolder counter-attacks like “too clearly understanding” the opponent’s playstyle. 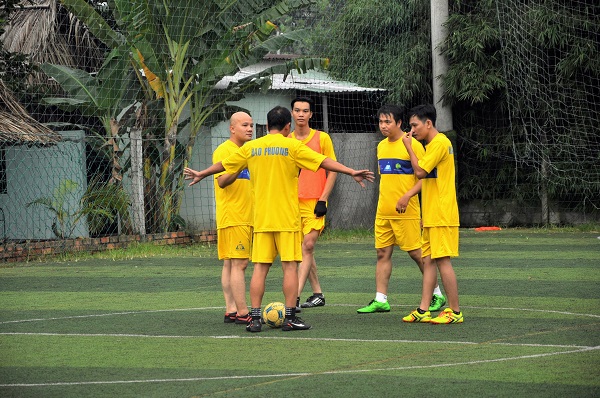 With the “response” and the help of his teammates, striker Trung Tan – the deputy of Team 1, made golden history for his team when overcoming many players to put the ball into the goal of Team 6, open the goal for his team and improve the score to 1: 3. And just a few minutes later, Trung Tan continued to shine with a spectacular shot, bringing the second goal for the team. 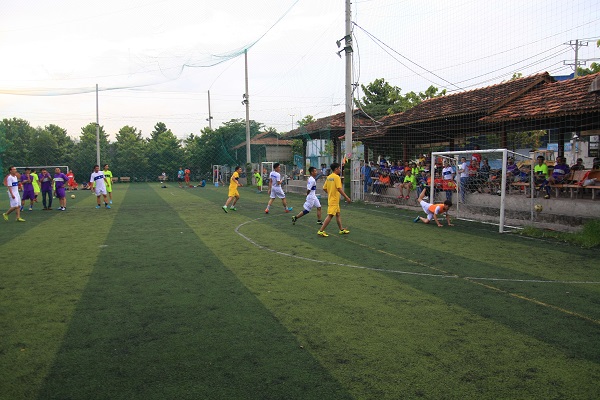 The beautiful performance of Team 6’s goalkeeper still cannot change the fact that the ball has conceded. Photo: Hong Hai

Seeing the opponent’s upstream swings, Team 6 did not miss any chance to attack but has yet to score any more goals. Meanwhile, the play style of Team 1 seems to be more and more intelligent, so all the balls have to pass the footsteps of their players, this is also the foundation for the player Khanh to continue to bring goals to the team Yellow shirt, the match score is 3: 3. This is the final result of match 1.

Match 2 is the competition of Team 2 (green shirt) and Team 5 (blue shirt). In the cheers of the fans, the strikers of Team 2 and Team 5 came out with a very relaxed mood.

Instead of attacking the opponent continuously, the two teams choose to play calmly, retreat to their own field and defend the goal. However, near the end of the first half, Team 5 rushed to attack and constantly created dangerous situations for their opponents. And in the 1-minute mistake of Team 2, Duc Nam of Team 5 has scored the first goal, opening the match score of 1: 0. The cheering for encouragement has not ended yet, the audience got up again when Duc Nam continued to finish successfully, bringing back the second goal for the team before the referee blew the whistle to finish the first half. 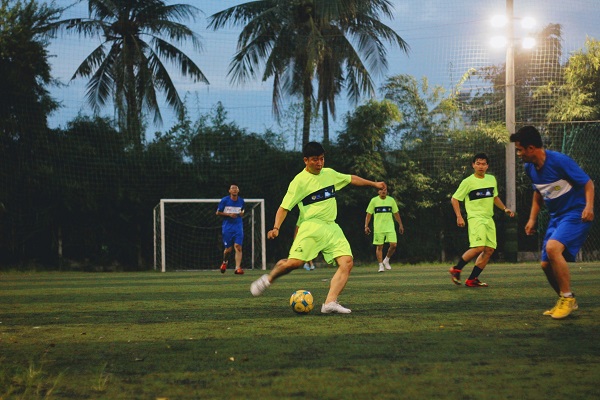 One of the beautiful ball of Team 2 players. Photo: Chau Quynh

In this second half, Team 2 quickly “announced the battle”, captain Quoc Thang promptly instructed the members to strengthen their defenses and tasked the attackers for excellent strikers. With the spirit of “Green team glowing, determined to be crowned”, Team 2 has more excellent and drastic balls. With the best effort, Team 2 shortened the score to 2: 1 from the beautiful ball of Quang Khai.

After this goal, Team 2 showed a more enthusiastic play. A team always looks for every opportunity to counterattack to remove the score, a team that keeps the defensive play and only attacks when necessary has created a balanced posture, satisfying the fans in the stands.

However, when the second half is about to end.

Team 5 suddenly put forces to attack and Duy Hieu – the promising young talent of the team scored an important goal, raising the score to 3-1. Immediately, striker Thien An also successfully combined with his teammates and handled the spectacular ball to bring the second goal to Team 2, improving the score to 3: 2. 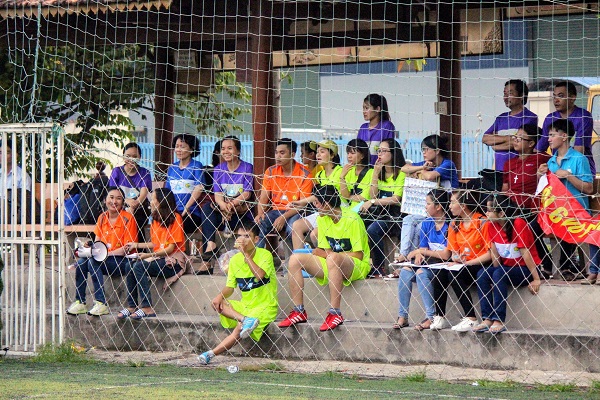 Fans – a solid “rear” of each team. Photo: Chau Quynh 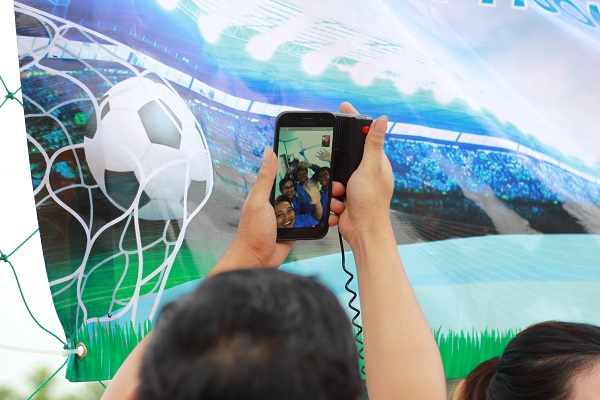 Direct reporting of the match for fans at the Ha Nam construction site. Photo: Chau Quynh

The difference in the ratio at “G hour” has created an extremely intense and fierce competitive atmosphere. Team 2 is ready to “respond” to the opponent’s “jerky” passes. However, due to lack of luck, team 2’s pass made before the opponent’s goal did not bring a goal. The score 3 – 2 remained the same until the end of the match and the final victory belonged to Team 5.

The last match of the first round is Team 3 (Redshirt) and Team 4 (Purple shirt). These are the two teams that are rated “equally talented”. Because of the warm-up time and waiting, the players did not hesitate to show off the beautiful and striking moments in the first minutes. Therefore, the match quickly got the first goal from the Van Nam player – Team 4. Less than 3 minutes later, Van Nam himself continued to score the second goal with the surprise of the opposing team. , and Team 4 fans kept shouting the slogan and calling the name of the bright star Van Nam.

Received 2 consecutive goals from the first minute of the match but Team 3 was not impatient, always looking for opportunities to attack the enemy team. And the penalty of close team 4’s goal helped Quoc Bao to score the first goal, the first half closed with a score of 2: 1, leaning towards Team 4. 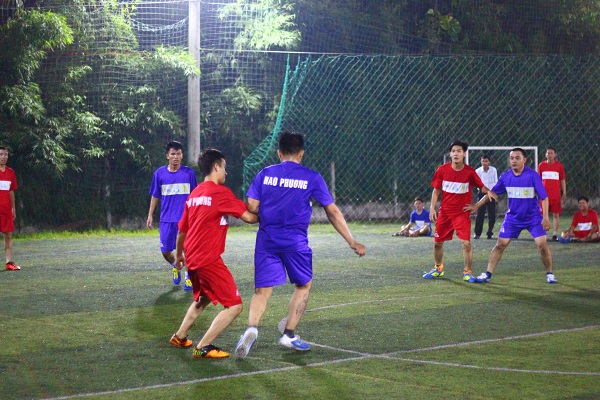 A ball makes the fans out in the stands “shocking heart”. Photo: Hong Hai

The second half of the final game was rated by the audience as the most nervous time when the two teams did not miss any chance to win the ball. With clever handling and professional ball movement, Van Nam once again overcame the other strikers and became the scorer of the match when adding 1 more goal, raising the current score to 3 -1.

Determined to keep the score until the end of the game

Team 4 had very intense minutes of playing. But realizing that the enemy team is not “easy to play”, despite trying to protect the goal, the formidable player of the team, Van Thanh of Team 3, “broke the net” successfully, improved the score of 2: 3. 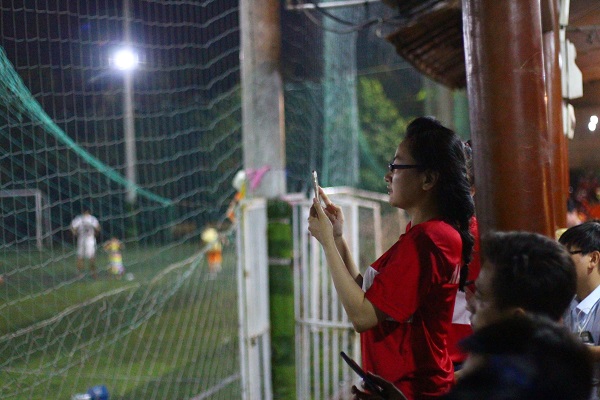 A supporter of the Red Team recorded the moments of fierce competition of strikers. Photo: Chau Quynh

With the determination to “not win but not to be defeated”, the strikers have continuously created many dangerous ball shots that made the audience scream in surprise. And luckily came with the red shirt when striker Cong Dung had a “sweet” penalty, helping the score to draw at 3: 3 and this is also the final result of match 3. 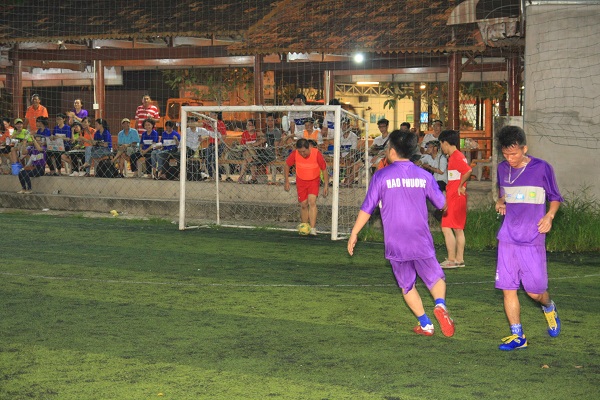 These are the two teams “equally talented” throughout the match. Photo: Hong Hai

Thus, the first round of the Football Tournament 2017 was officially closed.

The players after the hard moments of playing on the football field, the fans after enthusiastic cheers also returned to work. But we know that the echo of these three intense matches still lingers in them, and they will continue to prepare their team’s luggage to enter fierce competitions in the next rounds of this meaningful tournament.