In the afternoon of July 27, 2018, at Hiep Binh Phuoc stadium, the football tournament “Hao Phuong Group 2018” was officially kicked off with a lively and brilliant opening ceremony from 6 teams and fans joined competing. 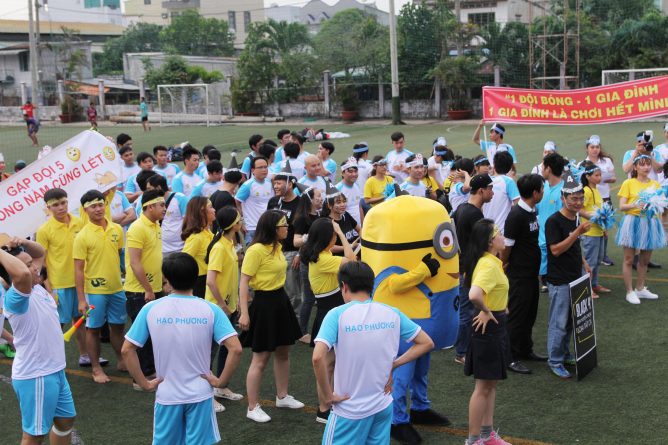 Table of Contents Hide
1 At exactly 5 pm, the bustling atmosphere enveloped Hiep Binh Phuoc stadium
2 Not just preparation.
3 Match 1: The clash of two opponents full of resentment
4 To the second half
5 Match 2: when the star speaks
6 To the second half
7 Match 3: The throne of teamwork
8 During the second half

Along with the outstanding players in Hao Phuong costume, the fans are “fiery”, ready to “burn” the tournament. 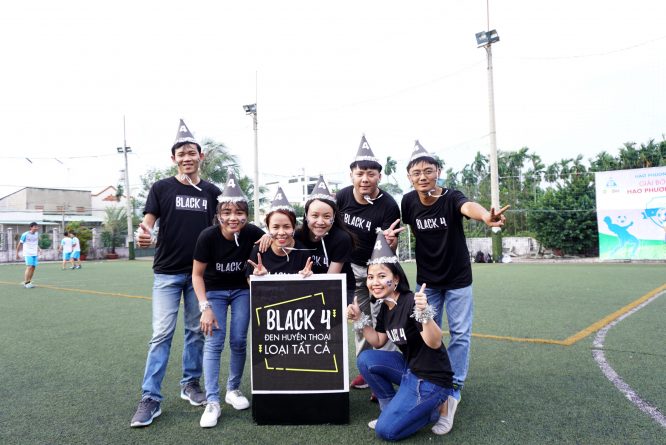 Along with the outstanding players in Hao Phuong costume, the fans are “fiery”, ready to “burn” the tournament. 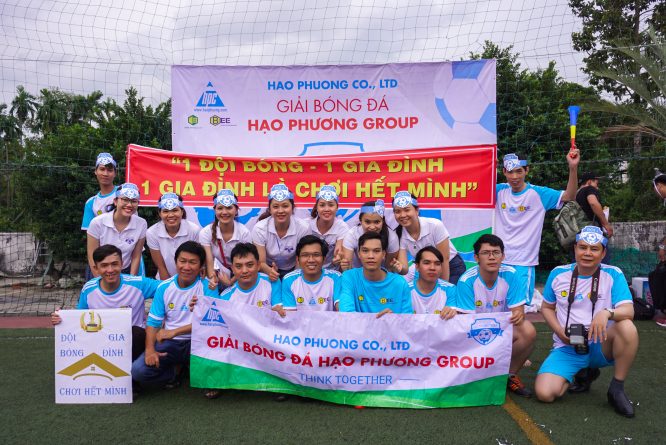 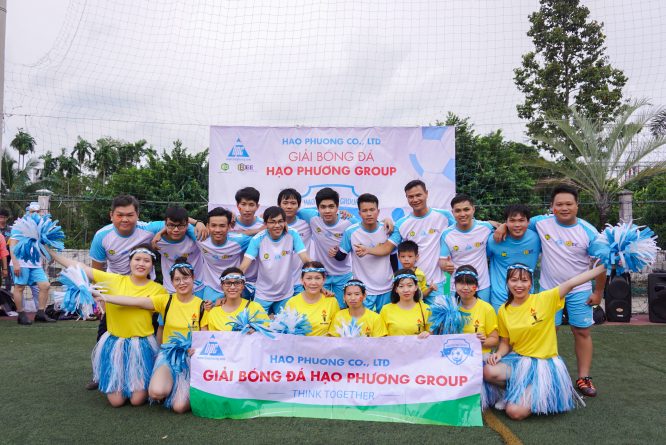 But be careful: Team 2 – Shoot you away. 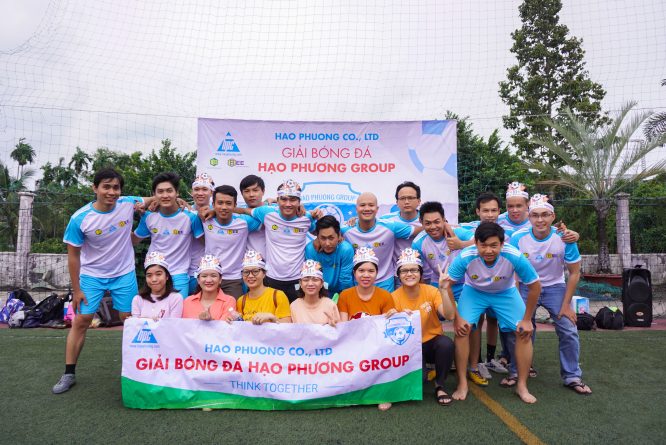 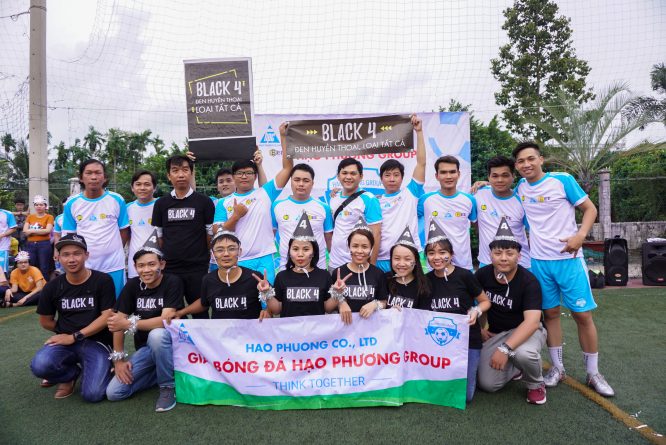 It seems that this year Halloween is coming soon with Team 4: Black 4- Black Myth – Eliminate weaklings. 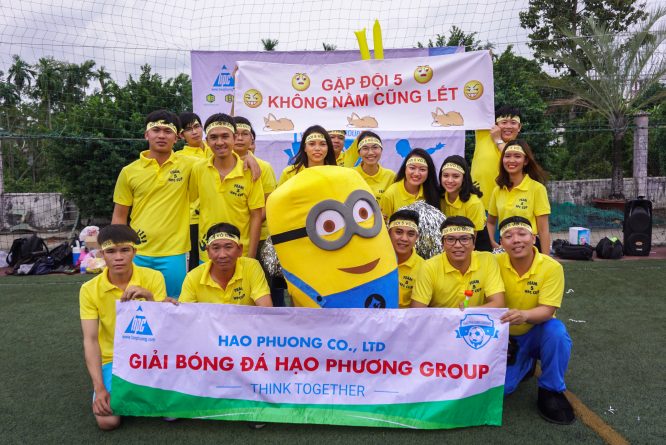 Meeting Team 5 – either lying or dying. 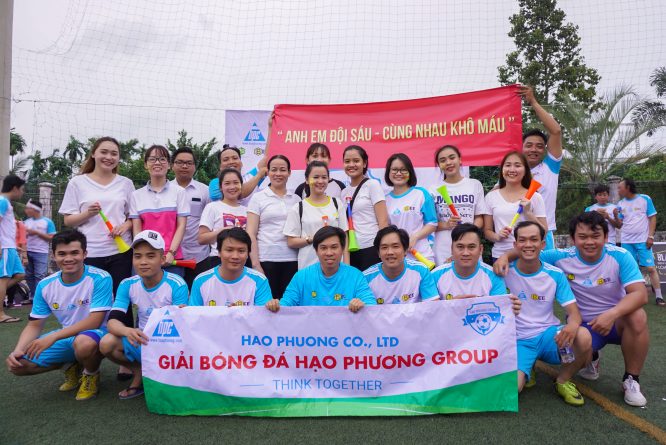 Team 6 has not played yet but already made people feel excited: “Team 6’s Brothers, play hard together”

About slogans, the beautiful cheerleaders also bring “storms” to the football field with exciting dance performances, bringing more bustling atmosphere than ever. With such careful and elaborate preparation, this year’s Style Award will surely make “a headache” for the Organizing Committee to select the winner. 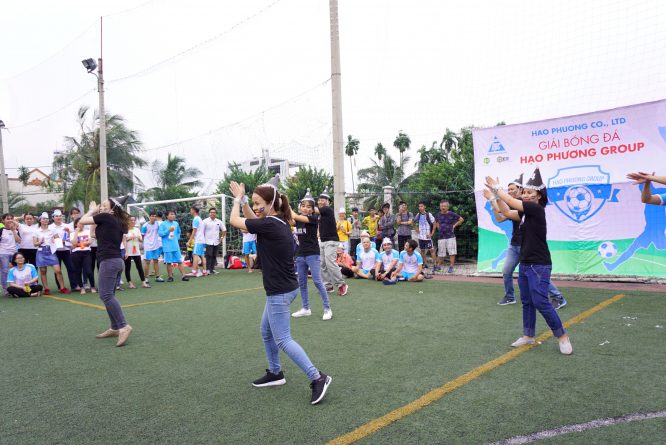 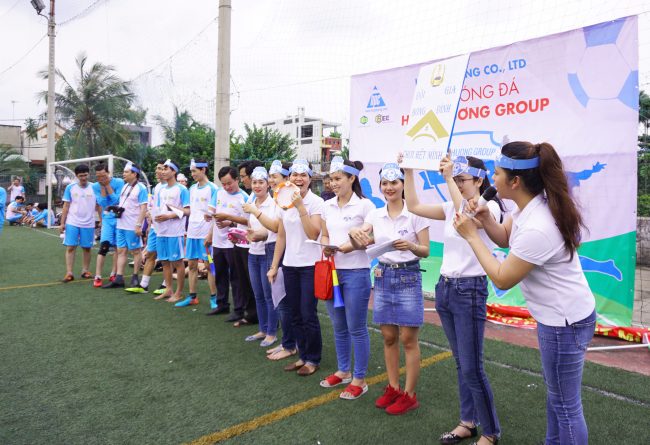 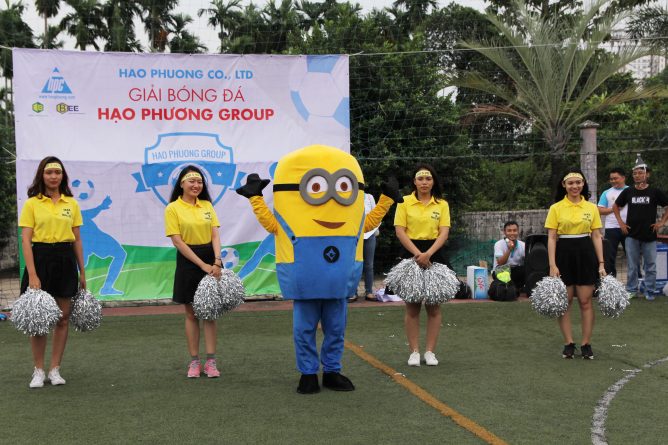 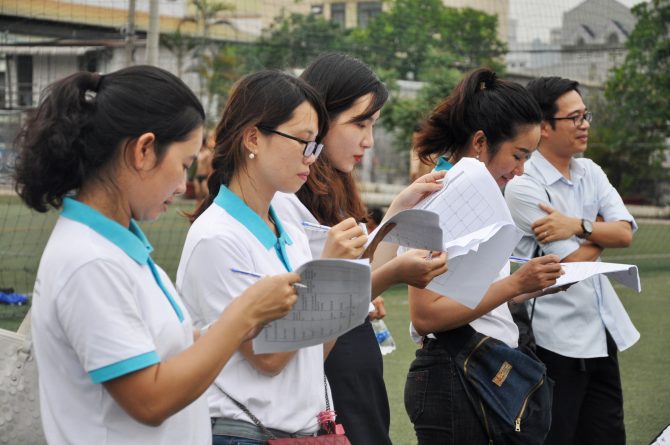 Everything made the organizers feel “headache”. 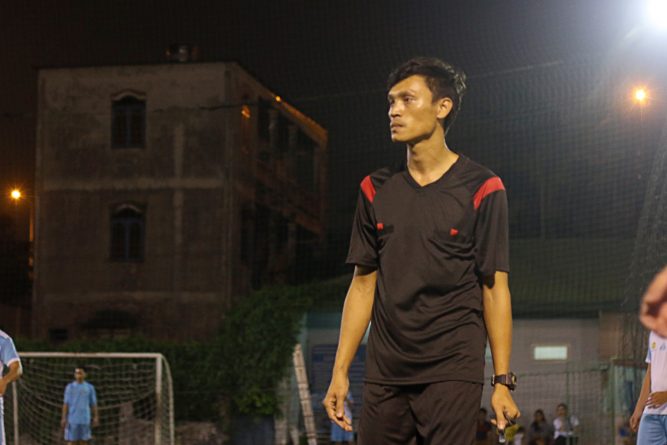 The operator of the match: Referee Nguyen Huu Viet Tuyen

Match 1: The clash of two opponents full of resentment

Meeting in the first match of last season with a draw of 3-3, team 1 and team 6 entered this season and continued to meet right from the first round. As the expectation of everyone, the match took place very excitingly right from the moment of the whistle of the first half 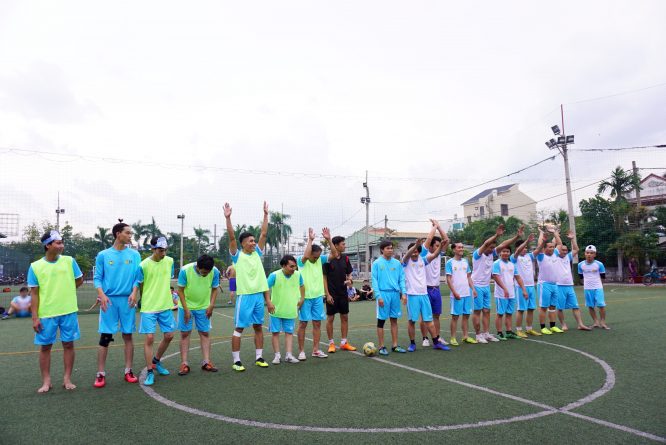 At the third minute, players of Team 6 had an organized coordination phase and launched the first shot to threaten the opponent’s goal. The two teams seem to “understand” each other’s play style, many kicks are released but still, no goals are scored. At the end of the first half, after a foul by Team 1, Team 6 was awarded a free kick but unfortunately, the ball was high against the opponent’s goal. The first half ended with a 0-0 draw. 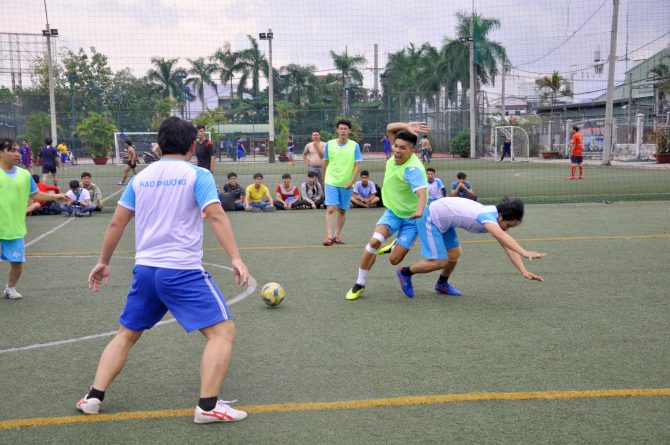 Team 6 with the “play hard together” determination constantly organized attacks but still did not create a dangerous situation. And Team 1, after the change of players, immediately had a threat to the goal of team 6, the ball bounced off thanks to a brilliant save by goalkeeper Duc Long.

The last chance came to Team 1 after an organized attack phase, the goalkeeper of Team 6 raised the ball to clear the goal. Immediately, Van Tin took advantage of the opportunity to put the ball into the net to open the scoring for team 1. 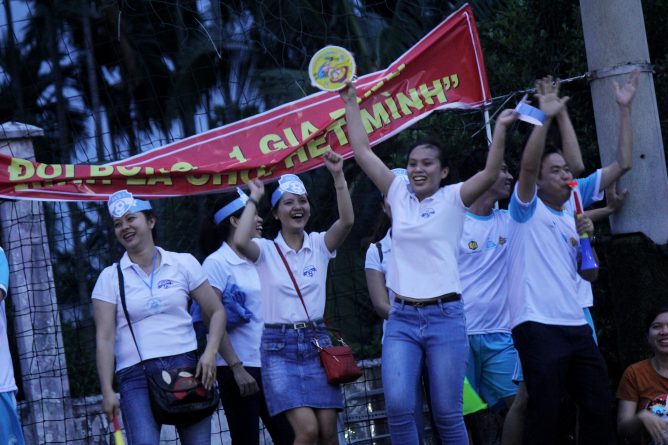 After the opening goal, team 6 rushed to attack but it seems that today’s strikers seem quite “ungainly” when missing too many golden opportunities. Meanwhile, taking advantage of the gap in the opponent’s field, team 1 opened a fast counter-attack and had a goal to widen the gap. 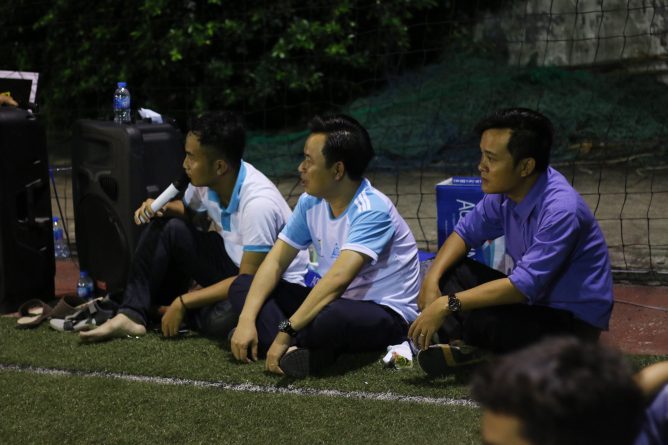 The commentator is “working”

At the end of the second half, the efforts of the strikers of the 6th team were rewarded with a goal to shorten the score to 1-2. This is also the final result of the match.

Match 2: when the star speaks 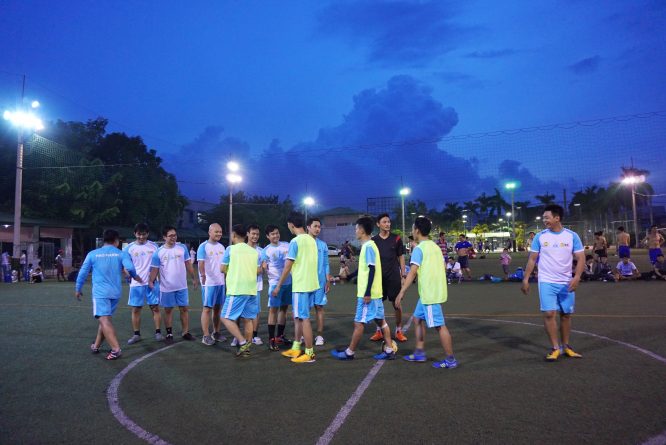 After a few minutes of advertising from Black 4, round 1 of the tournament continued with the talent show of Team 2 and Team 3. Without attacking aggressively like the previous two teams, team 2 and team 3 were cautious to find the playing style of their opponents. However, in the middle of the first half, after missing many opportunities, team 2 had a perfect coordination phase to create conditions for Anh Thien to open the score. 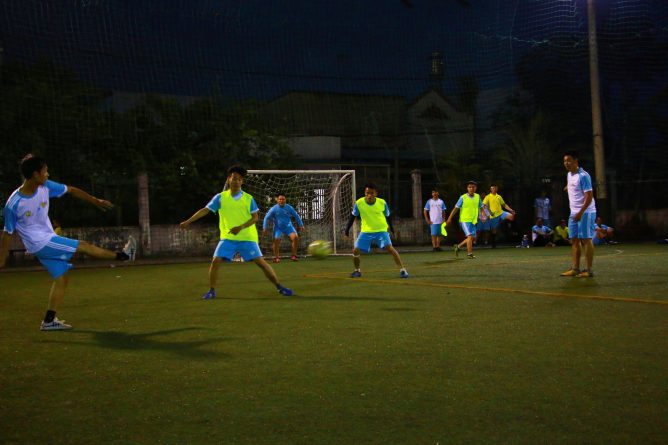 Team 3 immediately counterattacked and three minutes later, after a messy situation before the second team, Cong Trong scored the equalizer for team 3, bringing the match back to the starting line. 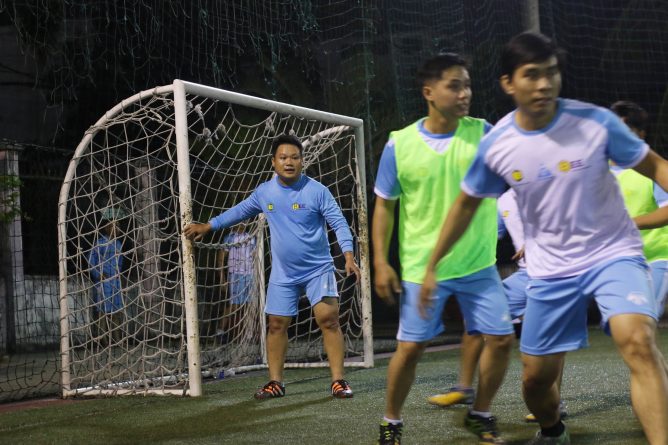 A messy situation in front of the goal

With the spirit of “shoot your team away”, team 2 competes more fiercely. In the cheering of the audience, Messi – Van Nam team overcame the oppression of the opponent and scored 3 goals in a row. Become a bright player for the title of top scorer. Before the shine of Van Nam, Team 3, despite their best efforts, has yet to meet luck. The match ended with a score of 4-1 in favor of team 2.

Match 3: The throne of teamwork 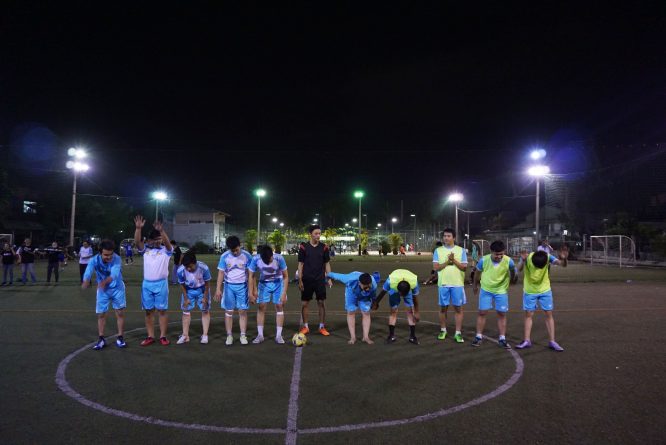 It took place at the end of round 1 but not so the match between team 4 and team 5 was less exciting. In contrast, the most enthusiastic atmosphere on the field comes from the fans of these two teams. 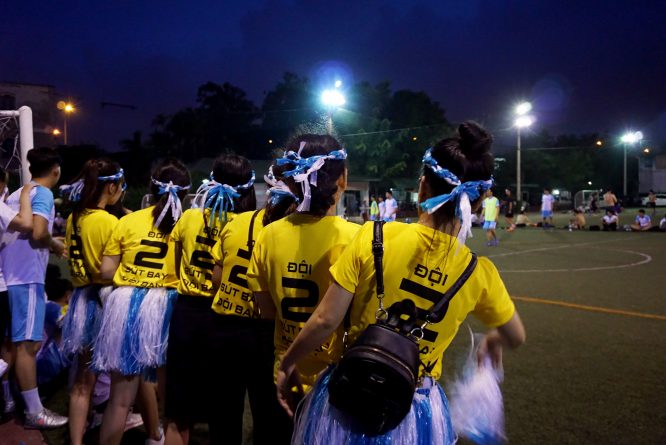 Fans of Team 5 in a “ready to fire” position

In the cheering of the audience, the players of both teams came out with a very comfortable mood. However, perhaps because of that, in a long-range combination of team 5, the goalkeeper of the 4-team did not stick the ball, creating a loophole for a Team 5’s player to kick down the score.

In the lead, Team 4 raises the attack and constantly threatens theTeam 5’s players. After a mistake helps the opponent open the score, Team 4 keeper has an excellent save with his feet, keeping the net clean until the rest of the first half. 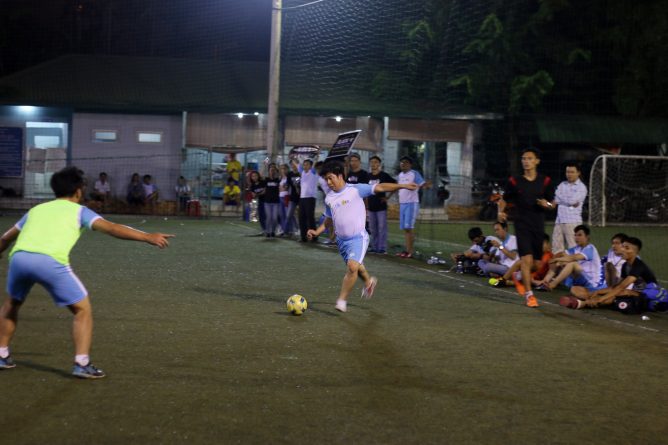 During the second half

Team 5 has shown great teamwork and received worthy results. In a free kick, Van Toi didn’t kick straight but passed the ball to the right wing for Trung Tan to score a beautiful goal to raise the score to 2-0.

After two consultations, team 4 raises the attack but has not yet put the ball into the opponent’s net. The journey to find honor of the Team 4 ended when Trung Tan and Ngoc Dung, in turn, continued to score two more goals for Team 5. Fixing the final score 4-0. 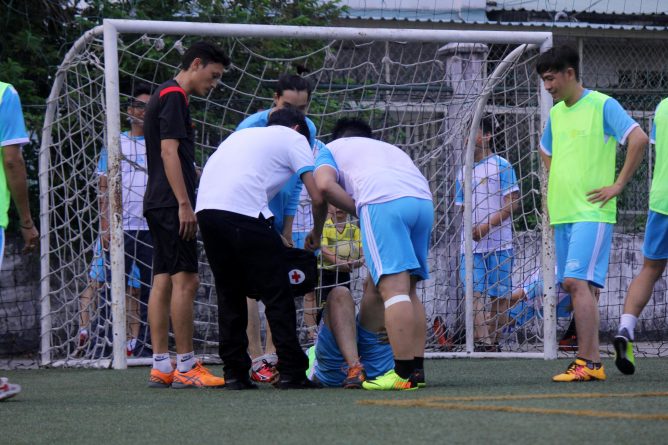 A player was in pain

Despite failing in the opening match, Team 4 still received enthusiastic cheers from loyal fans. This is the motivation for the players to gain more strength, continue to conquer the tournament in the next rounds. Join us to watch Round 2 happenings next weekend!