With the highest percentage of foreign investors entering Vietnam in recent years. Japan has always been a reliable partner and oriented towards long-term and stable development. Through this, Japanese investors have contributed significantly to the country’s development process in the past time.

Following Japanese investors into the Vietnam market in the early years of integration, Fuji Electric is a manufacturer of famous industrial electrical equipment of Japan, their products are distributed worldwide with a Full range of systems such as power plant systems, switchgear & controls in the factory.

Hao Phuong cooperated with Fuji to become the official distributor of Fuji since 2007. Through the difficulties of the Vietnamese economy or the recession of the global economy in 2009-2011. Hao Phuong and Fuji Electric still maintain and develop their market share in the domestic market regularly, reaching 20-30% / year.

On April 17, 2014, international sales manager Mr. Toru Chiba and Director of Asia Pacific region Mr. Okamura visited and worked with the leader of Hao Phuong Company for the 2014 development plan.

Thereby, the leaders of the two parties committed to working together to promote Fuji Electric products to market in Vietnam and Cambodia.

Also during this time Hao Phuong and Fuji Electric introduced the new line of ACB, MCCB, MCB, Inverter with many new functions and very competitive prices. 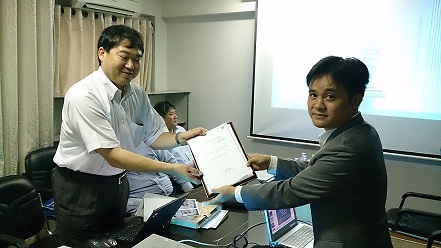