The 2019 annual Sports Festival has reached the final stage. A lot of memorable and impressive moments were recorded on August 10, the day of competition. Please follow through the following article.

Opening the final day of the 2019 Hao Phuong Annual Sports Festival is Team 1’s cheerleading competition. The whole group’s dance performance has contributed to warming up the atmosphere which was already very exciting in the field. 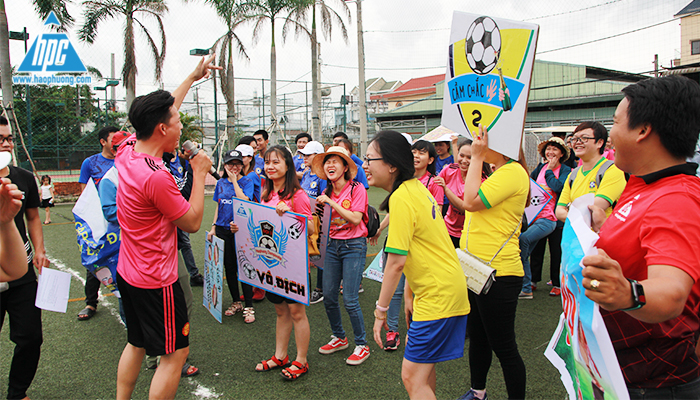 Teams focus on shouting slogans before the competition

This is the first game in the series of 5 games of the last day of competition. Each player of a team will have to hold a spoon to get a kumquat without using their hands. Then they have to overcome obstacles to pass the kumquat into the box of their team. At the end of this game, team 2, team 3 and team 4 scored 2 points per team. Sorry for Team 1 that they have not scored yet. Because of the number of kumquat of the first team is the least among 4 teams. 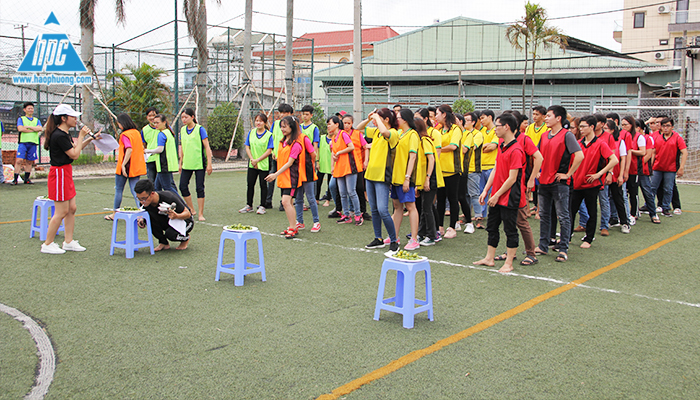 Members of all 4 teams gather to start the first game 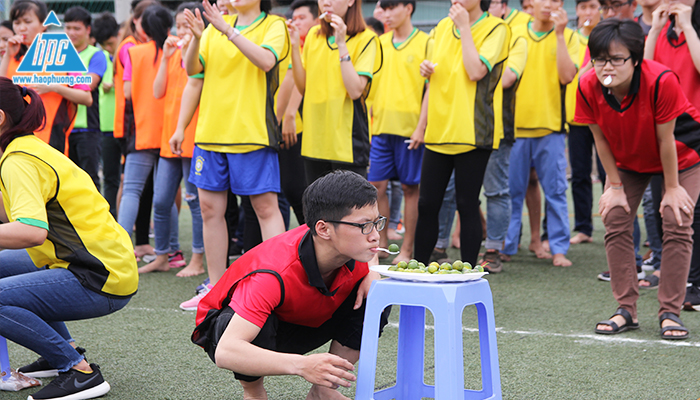 Getting a kumquat by mouth is an easy challenge for teams 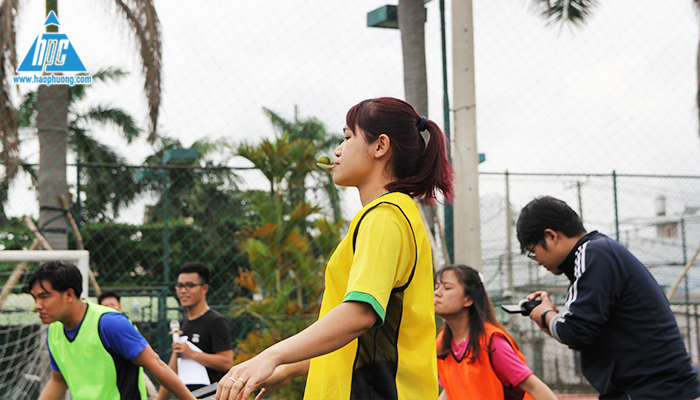 Even if you can get the kumquat, you have to be very clever to “transport” this “booty” to the finish line successfully 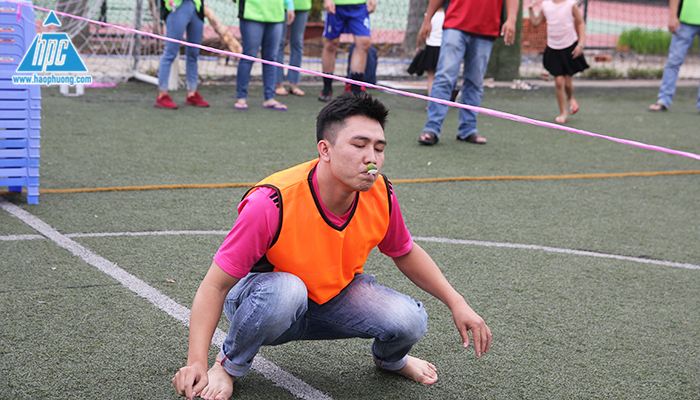 Not to mention having to overcome “difficult” obstacles like this

Efforts to put the kumquat into the box, by all means, are admirable

This game requires players to have certain knowledge about the products that Hao Phuong is supplying. Specifically, each team will have a paper box containing the nameplate of 15 devices. Each player will get 1 nameplate. Then pass obstacles and drop into the corresponding device container. Not all players know about the device. But the teams have tried hard to memorize the fastest name to join this game completely. At the end of the second game, team 3, team 2, team 1 and team 4 scored 3, 2, 1 and 0 respectively.

Let’s review some impressive moments of the second game through the following images: 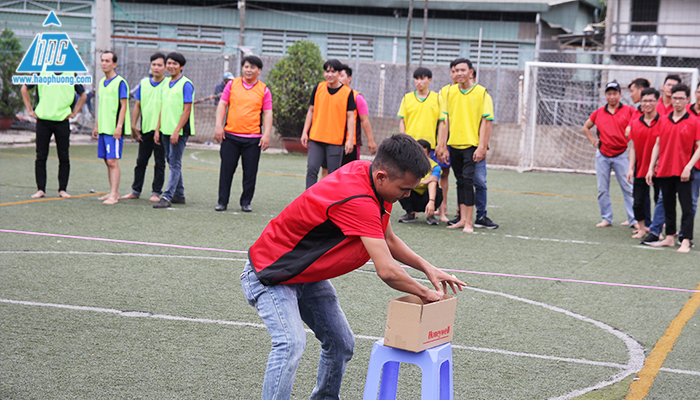 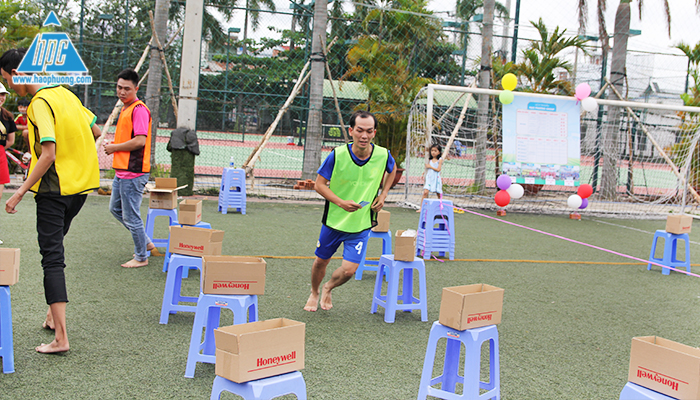 This game requires players to be agile and sharp-eyed to put name tags into the bucket in the shortest time.

This is a game that is considered to be the most energy-consuming of most teams. However, it is undeniable that this game is extremely funny. It has brought a lot of laughter to the teams. In each turn, each team has 6 people for holding 3 sacks with 1 other member above those sacks. On the starting line, the person lying on the sacks must use his mouth to blow the powder and suck one candy hidden under it. After that, 6 people holding the sack will carry their teammate to the finish line. There, the person lying on the sack will drop the candy into the carton box of his team. At the end of this game, Team 1 scored 3 more points. Two teams of 3 and 4 each scored 2 points. Team 2 gets 1 point.

The muscular youth got into position ready … 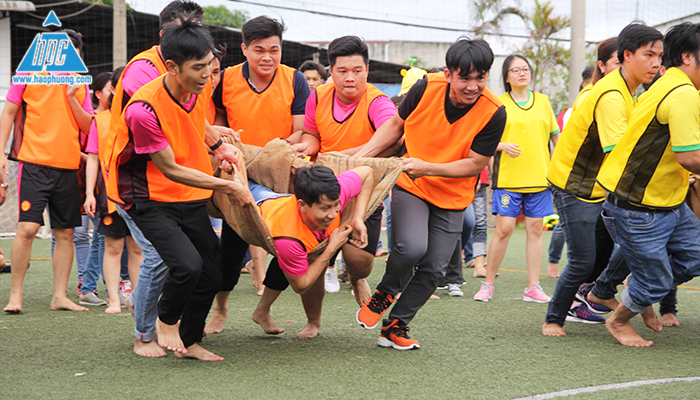 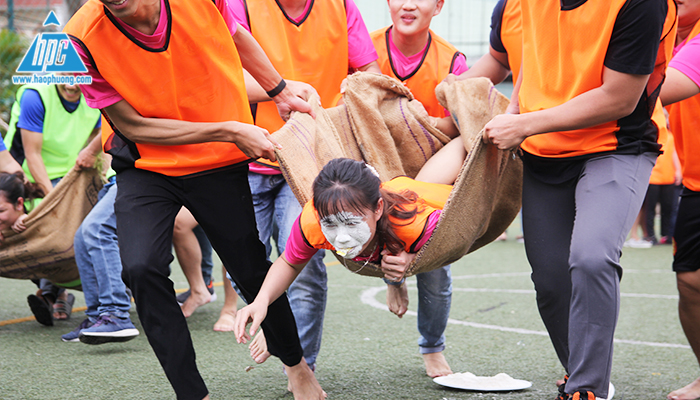 Although the face and the nose has stains, the spirit of playing hard of the teams is “nothing can stop” 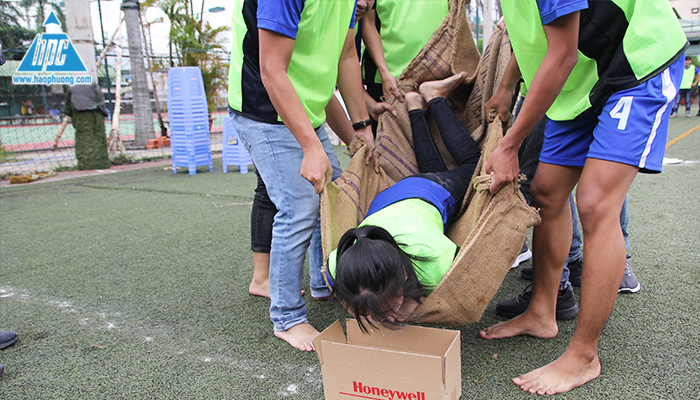 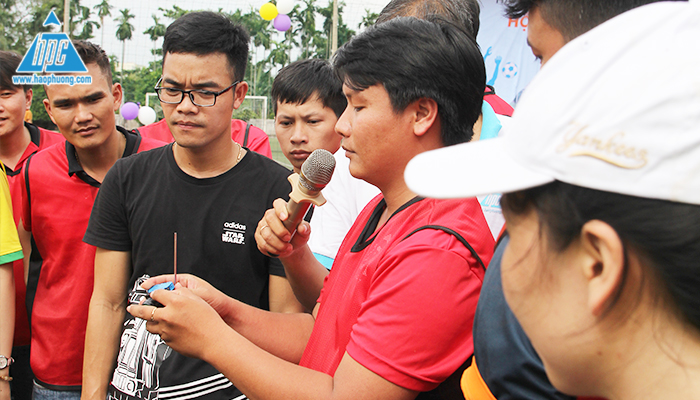 The representative of the organizing committee instructs the teams on how to remove the Indicator lamp. 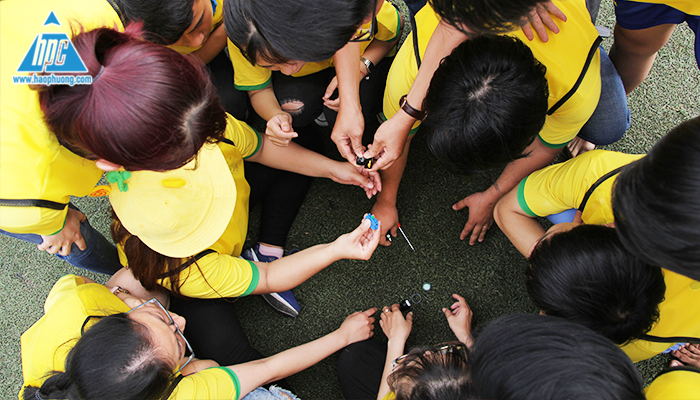 Team 2 members are learning how to dismantle the indicator light 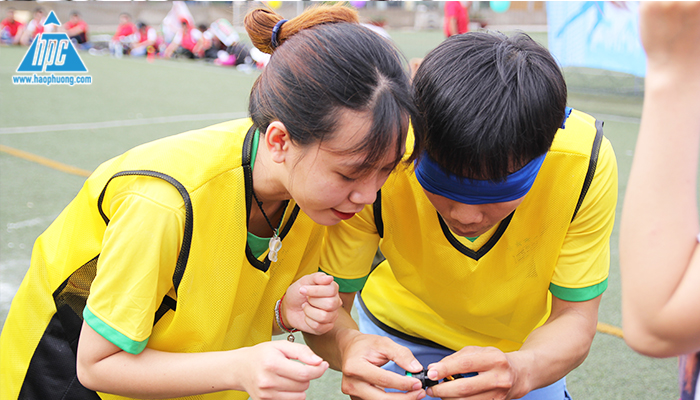 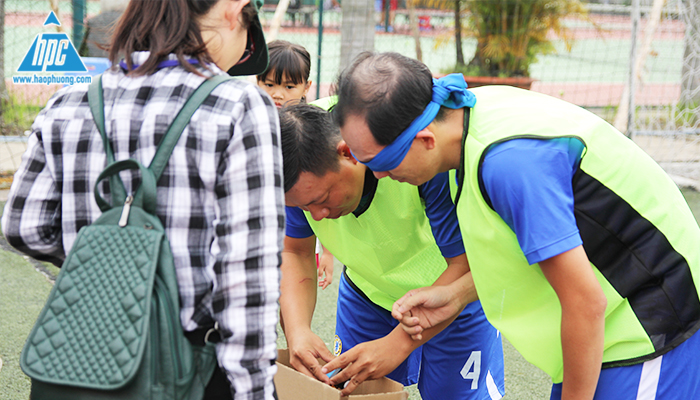 Anyone who participates in this game needs to be very focused 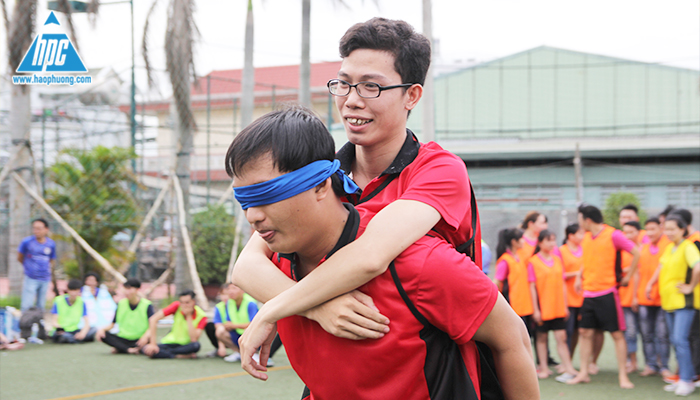 “Together we pass this game” 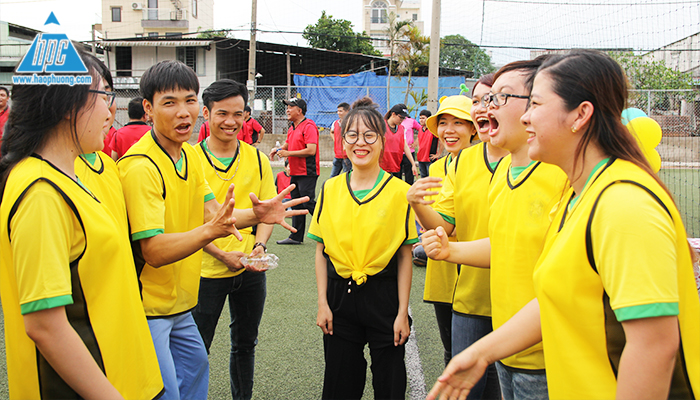 The last day of competition is coming to an end. The fifth and final game is called “Star Wars”. Members of each team will be given 1 balloon to blow according to the specified size and tied under the left ankle. All couples will gather in a large circle prepared. When the music pops up, the members of the teams will try to pop the balloon of other teams. When the music stops, everyone will have to stop. Members with a popped balloon will be removed from the playground. After each round, the circle will be narrowed. After this last game, the scores of team 2, team 1, team 4 and team 3 are 3, 2, 1 and 0 points respectively. 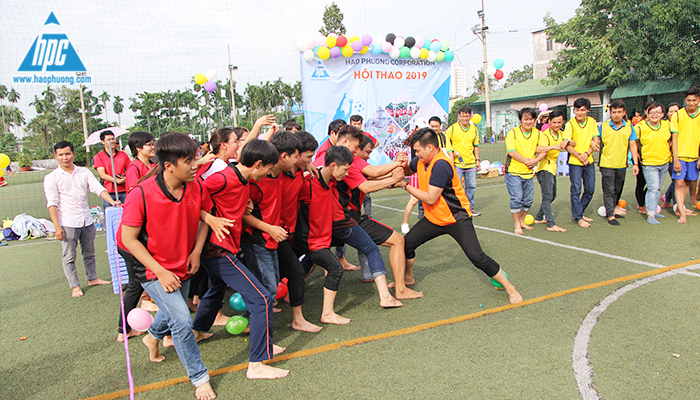 The team used defensive tactics very solid from the beginning 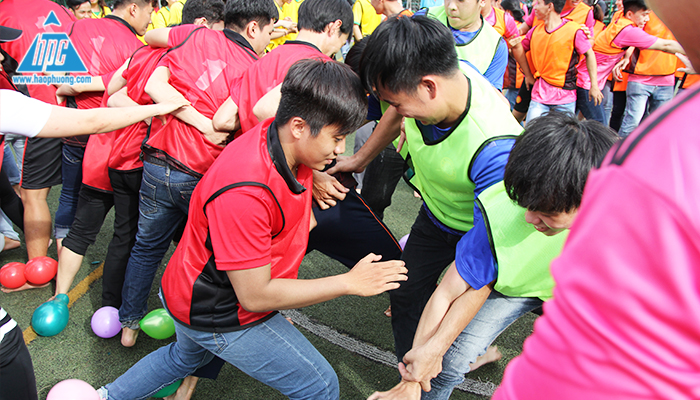 Everyone takes the opportunity to smash every balloon of other teams 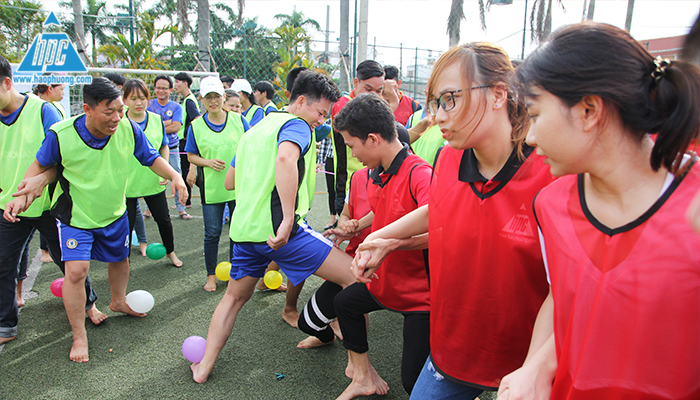 The atmosphere is lively but no less stressful 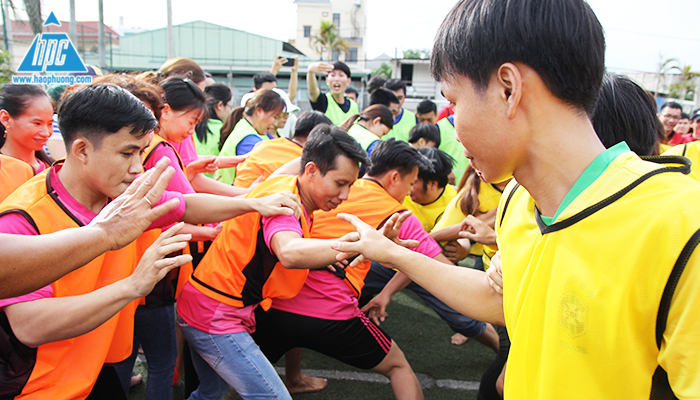 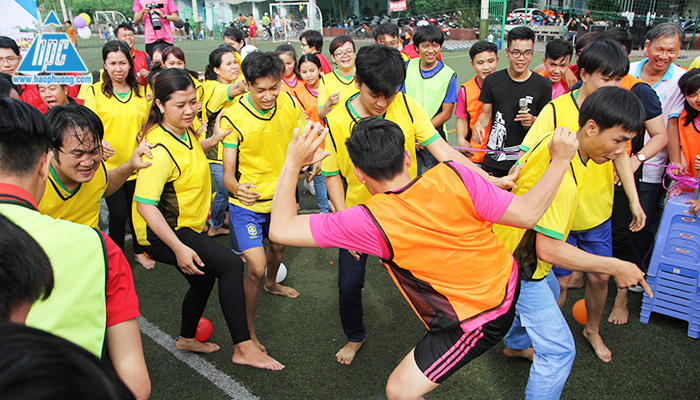 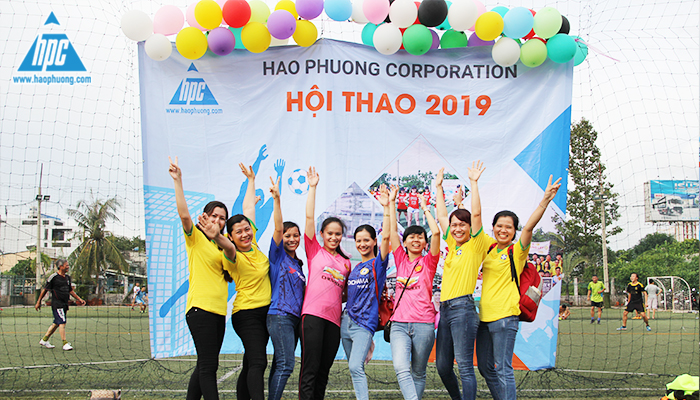 Photographed memories after the end of the Sports Festival

The annual 2019 Sports Festival ended with many beautiful impressions. Information on the final results as well as the closing ceremony and the Sports Festival awards will be updated in subsequent articles.